Sun shines on Irish tourism but clouds gather ahead 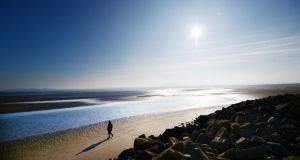 Tourism is responsible for one in eight jobs in the State and is worth an estimated €7.3 billion to the economy. Photograph: Bryan O’Brien

Irish tourism has never been in a better place. Recent figures point to the best-ever August for tourism numbers, and Tourism Ireland says the Central Statistics Office numbers indicate the first eight months of the year have set new records.

Responsible for one in eight jobs in the State and worth an estimated €7.3 billion to the economy, and growing, the sector also has significant policymaking heft.

But much like the view from the Cliffs of Moher in typical Irish weather, the horizon is far from cloud free. Lift the bonnet of the industry – as The Irish Times did on a week-long road trip to meet tourism operators around the State – and you will find an engine working extremely hard, but in need of some fine-tuning.

British tourists account for about one in four inbound visitors but the State has yet to draft a coherent plan to deal with the effects of Brexit on that number. The early data rolling in to Fáilte Ireland suggests British tourists are already viewing Ireland less of a value destination as sterling slides against the euro and this market becomes relatively more expensive.

The special 9 per cent VAT rate, which was brought in as a temporary crisis measure to stabilise the sector in the storms of 2011, is also in the spotlight. There are complaints from within the industry that the benefits of State subsidy are not flowing where they are needed most.

How can the staff canteens of big corporates benefit from a supposed tourism tax subsidy when boat and bike rental hire companies and tour guides do not? With such kinks in the system, is a flat VAT reduction still the best way to help those parts of the industry that need it, without overheating the elements that don’t?

When the Government is allocating resources for capital and marketing investment, State tourism agencies are, understandably, judged on the immediate returns they generate in terms of extra visitor numbers. This incentivises them to plunge those resources into the most obvious tourism-friendly areas. It is akin to a television channel chasing ratings.

But what about the less obvious parts of the State – places such as Roscommon, that might not provide an immediate return on investment, but would benefit hugely in future from a concerted effort now to help them realise the tourism potential they have on their own doorstep?

Must counties, such as Roscommon, lose out in the long run when resources are being allocated because they can’t compete with the short-term ratings of more established tourism areas? Why not spread the benefits of the tourism boom more widely?

And what happens when, to mangle the phraseology of a famous phrase mangler, the tourism boom in some areas gets even more boomer and overwhelms the locality? Is there an infrastructural plan to help areas such as Doolin, in Co Clare, which is so successful it is now bursting at the seams with tour buses clogging up the town?

Shaun Quinn, the chief executive of Fáilte Ireland, which has masterminded the new branding strategy around the Wild Atlantic Way and Ireland’s Ancient East, says the agency wants to promote only “sustainable growth”.

“We are active across all 26 counties. There is a piece of work under way for those areas [that don’t fall in either of the two brands]. It may require some capital investment, but all those areas have something to offer.”

Quinn concedes that current tourism growth levels – foreign visitors in the first six months of the year were up 13 per cent – “won’t continue indefinitely”.

“The UK market is one you would wonder about,” he says. “The preliminary survey data we are receiving tells us the perception of Ireland in terms of value for money is already beginning to drop among British visitors.”

He warns that “complacency” could set in within the tourism industry after a period of such strong growth. “You can lose ground overnight. We are on the edge of a very mature tourism market: Europe. If we want to grow our share, we’re going to have to eat someone else’s lunch.”

The risk of damaging price inflation in the industry is real, Quinn says, noting “Ireland has been here before”. He said it is important the industry doesn’t get carried away.

The focus for Fáilte Ireland is to help businesses and regions broaden the so-called “shoulder seasons” immediately prior to and following the main summer season in tourist destinations. This is especially important on the Wild Atlantic Way, where many areas are at or over capacity in peak months.

“We are trying to get businesses to stay open longer,” Quinn says. “The Wild Atlantic Way, you know, is really wild in the off season.”

Dublin is at capacity, he says, and the authorities need to “reprogramme” how capacity and seasonality is managed.

As for Ireland’s Ancient East, Fáilte Ireland hopes the branding will anchor a new strategy to help turn the region from a “transit zone to a touring zone”.

“We need offerings of scale that tourists can get their head around. Ireland has never had a problem with awareness. The challenge is to convert that awareness into visits.”

Do the tourism authorities need more resources from the State to address the challenges ahead?

“If we had more, we could certainly spend them.”

1 Google tells workers to return to country where they are employed
2 Probate is changing: What does that mean for you?
3 Sean Quinn stunned at rebranding of Quinn Industrial Holdings
4 Will tracker mortgage be at risk if Ulster Bank closes?
5 Whistleblower warned EY of Wirecard fraud four years before collapse
6 Three Ireland switches on 5G network around the country
7 Seán Quinn on rebrand, Irish golf tourism wipeout, and probate changes
8 Subway franchisee loses Supreme Court claim for zero VAT liability
9 Dublin Aerospace takes over Flybe’s aircraft servicing base in Exeter
10 Me & My Money: ‘Money can’t buy you happiness but it can make life a lot easier’
Real news has value SUBSCRIBE