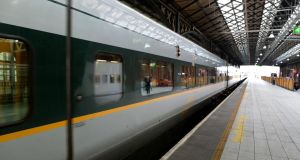 A budget of just under €600 million has been allocated for the maintenance and improvement of national, regional and local roads. Photograph: The Irish Times

Minister for Transport Paschal Donohoe is “confident” that his department’s budget allocation will be enough to tackle Irish Rail’s cash problems.

The Department of Transport, Tourism and Sport will have a total budget of €950 million in 2015, with €210 million set aside for targeted investment in bus and rail companies through public service obligation contracts.

Mr Donohoe said yesterday he intends discussing how this money will be spent with the board of public transport body, CIÉ. “I am confident that we will be able to deal with the many difficulties in Irish Rail, ” he added.

Management at the State-owned company recently warned that its current services are unsustainable without the option of either pay cuts or increased funding. However, 2015’s budget for public transport is largely unchanged on this year.

The company recently diluted plans to cut wages by between 1.7 per cent and 6 per cent for 28 months following a dispute with workers over the proposals that led to industrial action. The reductions will now be imposed for 25 months.

Last month, The Irish Times reported that internal department documents indicated that the company was facing losses of €20 million even with the proposed pay cuts.

During the dispute, unions including Siptu and the National Bus and Rail Workers’ Union called for an increase in State subvention for the public transport company.

Mr Donohoe pledged at the time that there would be no further cuts in the cash that the Government allocates to the public service obligation, which had been cut in previous budgets.

The Minister added that his committment had been honoured in today’s budget and said that it would allow current bus and rail services to be maintained.

Speaking after Minister for Finance Michael Noonan outlined details of Budget 2015, Mr Donohoe said his department had been allocated €954 million for next year.

That figure includes €50 million of €82.5 million in extra stimulus funding given to the department this year which brought its total 2014 budget to €982.5 milion.

The Minister said the allocation for spending on roads and public transport next year was “broadly unchanged” on this year.

Overall, €893 million will be spent on roads, rail and buses, a number that includes the €50 milloin stimulus funding carried over form this year. The Minister argued that this move recognised the importance of investing in the Republic’s critical infrastructure.

“A total of €598 million has been allocated for the maintenance and improvement of our national, regional and local roads, which is broadly unchanged compared to last year,” Mr Donohoe said.

He added the funding would be used to complete the €250 million N7/N11redevelopment and to begin other planned work, such as the Gort to Tuam N17/N18.

Some of the money will also be used to pay for the Luas cross-city line, which connects Dublin’s two tram services, the maintenance of the rail network and the upgrading of the bus fleet.

His department will also provide money to improve bus stops and provide more real-time passenger information on public transport services in order to make them more attractive to commuters.

Minister of State for Tourism and Sport Michael Ring said a further round of the sports capital funding would provide club and organisations around country with the opportunity to apply to the Government for development funding.

“The maintenance of current expenditure funding for sport at 2014 levels will allow the Irish Sports Council to continue what can only be described as an exceptionally successful programme for high-performance sport next year, which will facilitate our athletes in their preparations fo rthe 2016 Olympic Games in Rio,” he said.

1 Who are Ireland’s 17 billionaires?
2 My father in a nursing home wants to gift me his house
3 Are there annual limits on inheritances or gifts to a child?
4 Ireland ranked second in Europe for data breach notifications
5 State-backed Finance Ireland weighs stock market flotation in 2020
6 Davos Diary: Chilly reception for Trump’s ‘prophets of doom’ speech
7 State subsidises public sector retirees to cover gap until State pension
8 Richer countries must do more to tackle climate change, Thunberg tells Davos
9 Long-hyped smart fridges will never run out of milk or data
10 Countries that fail to attract immigrants will lose out – Microsoft chief
Real news has value SUBSCRIBE