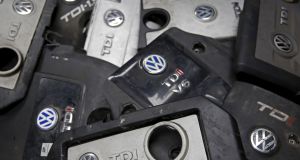 It has only been a week since the stunning revelation that the Volkswagen group equipped millions of diesel-powered cars with software designed to fool anybody testing their emissions, and just days since the company’s chief executive, Martin Winterkorn, resigned. (Photograph: Dado Ruvic/Reuters)

It has only been a week since the stunning revelation that the Volkswagen group equipped millions of diesel-powered cars with software designed to fool anybody testing their emissions, and just days since the company’s chief executive, Martin Winterkorn, resigned.

And yet there are reasons to believe that the fallout from this scandal will be as big as Enron, or even bigger. Most corporate scandals stem from negligence or the failure to come clean about corporate wrongdoing. Far fewer involve deliberate fraud and criminal intent.

Enron’s accounting manipulation is often held up as a prime example of the latter and cases featuring the US energy company’s massive financial fraud are therefore taught in business schools around the world.

Here are seven reasons why the Volkswagen scandal is worse and could have far greater consequences.

First, whereas Enron’s fraud wiped out the life savings of thousands, Volkswagen’s has endangered the health of millions. The high levels of nitrogen oxides and fine particulates that the cars’ on-board software hid from regulators are hazardous and detrimental to health, particularly of children and those suffering from respiratory disease.

Second, led by Volkswagen, Europe’s car manufacturers lobbied hard for governments to promote the adoption of diesel engines as a way to reduce carbon emissions. Whereas diesel engines power fewer than 5 per cent of passenger cars in the US, where regulators uncovered the fraud, they constitute more than 50 per cent of the market in Europe thanks in large part to generous government incentives.

It was bad enough that Enron’s chief executive urged employees to buy the company’s stock. This, however, is the equivalent of the US government offering tax breaks at Enron’s behest to get half of US households to buy stock propped up by fraudulent accounting.

Third, the fines and lawsuits facing Volkswagen are likely to surpass Enron in both scale and scope. Volkswagen’s potential liability to Environmental Protection Agency fines is $18bn. Add to this fines in most or all of the 50 US states and class action lawsuits by buyers and car dealers who have seen the value of their cars and franchises diminish overnight and you have a massive legal bill.

No jury in the US will be lenient with a foreign car company that touted its “clean diesel” technology when the technology on board instead served to hide the fact that particulate emissions were up to 40 times greater. And that is before expert testimony about the effects on children with asthma. Yet crucially, fewer than 5 per cent of the cars in question were sold in the US and regulators in Europe, South Korea and elsewhere have already launched investigations. This is a truly global fraud and global scandal.

Fourth, Enron was wiped out when the revelation of its accounting fraud showed the company had been suffering massive losses. Volkswagen could get wiped out even though the company is financially healthy. The stock collapse is only the beginning. Potentially irreparable reputational damage, a crisis of confidence and massive legal liabilities could do the company in.

And whereas Enron was a young, though admittedly admired company, Volkswagen is the 78-year-old centrepiece of Germany’s most important industry.

Fifth, because of Volkswagen’s central role in Germany’s automobile industry, the scandal is a devastating blow to the country’s global image. For years, Mercedes, BMW, Audi and Volkswagen have used German slogans and tag lines in their English-speaking advertising to link their products to the country’s engineering prowess. Expect to see “Das Auto” and “Vorsprung durch Technik” to be wiped off billboards as fast as value has been wiped off German car manufacturers’ market caps.

It was fairly easy for most US companies to distance themselves from Enron’s fraud. It will be much harder for the rest of German industry.

Sixth, even if it turns out that other European and Asian car manufacturers who have invested heavily in diesel technology did not commit such brazen fraud, the scandal will probably reestablish the perception of diesel engines as dirty after two decades of concerted effort to change that view.

This will not only put hundreds of thousands of jobs at risk, but also deprive policymakers of a tool they counted on to reduce carbon emissions. In the long run, the impetus to develop even cleaner alternatives may be good but in the short run it is a massive problem for Europe in particular.

Seventh, and perhaps most importantly, whereas Enron tainted the accounting profession’s mantra of trustworthy financial reporting, Volkswagen’s fraud will for a long time confront anybody advocating technology and engineering as a means to achieving greater environmental sustainability.

“Clean diesel”, it turns out, is as much a lie as “clean coal”. Volkswagen’s abhorrent behaviour therefore threatens to delegitimise the countless and essential efforts by companies around the world to develop scalable environmental solutions.

Herein lies perhaps the biggest tragedy in this whole affair: Volkswagen has emboldened the cynics at a time when we need business efforts to save the planet more than ever.