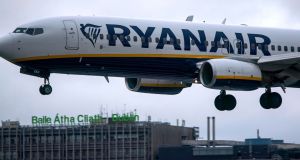 In judicial review proceedings Ryanair claimed it was refused leave by an appeals commissioner to cross-examine witnesses in the long-running case involving a pilot, Paul Clements, concerning his employment status for purposes of insurability.

Ryanair has settled its High Court proceedings over the hearing of a social welfare appeal concerning the employment status of a pilot for purposes of insurability.

In judicial review proceedings Ryanair claimed it was refused leave by an appeals commissioner to cross-examine witnesses in the long-running case involving a pilot, Paul Clements, concerning his employment status for purposes of insurability.

As a result of the settlement, the hearing, which had been put on hold pending the outcome of the High Court case, will resume in April and is expected to take three days to hear.

Ryanair, represented by Martin Hayden SC, with Eoin O’Shea, claims Mr Clements is a director and shareholder of Redsberry Management Services which contracted with another company to provide the services of Mr Clements to Ryanair over a four-year period to 2014.

The Department of Social Protection had in 2015 determined Mr Clements was insurable as an employee of Redsberry under PRSI Class A for benefits and pensions under the Social Welfare Acts during the four-year period.

Mr Clements appealed that decision and contended he was an employee of Ryanair but, in a 2016 decision, the appeals officer agreed with the department’s decision.

Redsberry then brought an appeal claiming Mr Clements was self-employed.

An oral hearing began in 2017 and had been adjourned a number of times.

When last adjourned Mr Clements was still under cross examination by Ryanair.

In a written decision last year, the appeals commissioner refused Ryanair liberty to cross-examine certain witnesses but said it could continue cross examination of Mr Clements.

Ryanair claimed it was also refused liberty to present its own evidence or to give submissions.

Arising out of the decision, the airline brought a judicial review challenge against the chief appeals officer and the Minister for Employment Affairs and Social Protection. Mr Clements and Redsberry were notice parties.

Ryanair sought to have set aside the order refusing it leave to cross-examine witnesses called on behalf of the pilot and Redsberry.

On Tuesday, Mr Justice Charles Meenan was informed the case had been settled following discussions between the parties. Under the terms of settlement, it was agreed the proposed witnesses will give their evidence and can be cross-examined at the hearing. It was agreed any witnesses Ryanair wishes to call will complete their evidence within the allotted three days of the hearing. It will be up to the appeals officer hearing the appeal If any additional days are to be allocated, which will only be done in exceptional circumstances. The respondents also agreed to make a contribution towards Ryanair’s legal costs.