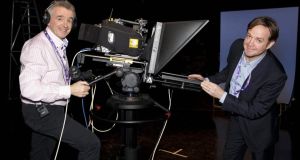 The changes mark the first senior management reorganisation at the airline since it floated on the Irish Stock Exchange in 1997, Michael O’Leary said. Photograph: Alan Betson/The Irish Times

Ryanair is appointing its first chief marketing officer in a management shake-up designed to underpin changes at the airline that is seeking to boost its public image and improve customer service to attract more passengers.

The carrier announced a number of management changes yesterday, the most significant of which is the appointment of Kenny Jacobs as its first chief marketing officer.

Marketing roles
Most of his experience is in retail. He has held senior positions with Tesco in the Republic and Britain. Prior to that he worked for German group Metro in several marketing roles in Europe and Asia.

He will have overall responsibility for marketing, public relations and communications at the airline, whose chief executive Michael O’Leary last September announced sweeping changes that included overhauling its website and improving customer service.

The appointment also signals that Mr O’Leary is likely to follow through on his promise to step back from acting as Ryanair chief spokesman. It is understood a substantial part of that role will fall to Mr Jacobs.

Mr O’Leary said yesterday the changes marked the first senior management reorganisation at the airline since it floated on the Irish Stock Exchange in 1997.

While he has said Ryanair’s new approach is a response to the fact that rivals such as EasyJet are catching up with the airline, it is also part of a drive to attract new customers to fill the 175 new aircraft the airline will start bringing into service from September.

The company wants to grow passenger numbers from 81 million a year at present to 110 million over the next five years.

1 Should my mam wait for house prices to drop before buying?
2 Pilita Clark: Why we’re about to learn if we are really in the A-team
3 Irish whiskey sales near milestone of 12m cases a year
4 Citigroup warns that markets are out of step with reality
5 US ‘hard seltzer’ drink White Claw launches in Ireland
6 ‘I have a talent for justifying purchases’
7 Hard-hit SMEs get ‘paltry’ €11m worth of loans under State scheme
8 ‘I’m so lucky to be in the Caribbean – a million miles from Derry Girls’
9 Chris Johns: Past is another country when it comes to our post-pandemic future
10 Military-style planning can help businesses battle Covid-19 survival threat
Real news has value SUBSCRIBE