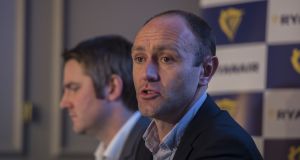 Irish airline Ryanair is taking on internet giant Google in its battle against online intermediaries that it says wrongly sell its flights to consumers at inflated charges.

Ryanair has taken a series of successful court cases in a number of European countries to prevent screen-scraper websites from selling tickets on its flights without the carrier’s permission.

On Tuesday, the airline demanded that internet search giant Google enforce greater transparency in online advertising to prevent Ryanair customers being “misled” into buying their flights from screen-scraper sites.

Ryanair says that websites such as eDreams are paying Google to have their ads ranked above the company’s own site, so that they top the list of results when consumers search for the airline.

It argues that this leads to customers booking their flights through the eDreams website rather than Ryanair’s own.

As a result, the carrier says, they are subject to hidden charges and their contact details are not passed on to Ryanair, which means that they miss out on up-to-date flight information.

A German court recently ruled that eDreams had been using an unlawful subdomain and was misleading customers into thinking that it had an official partnership with Ryanair.

The airline’s chief marketing officer, Kenny Jacobs, said that “numerous” customers have complained to it that eDreams ad on Google had inadvertently led to them buying flights through the screen-scraper’s site.

“EDreams has been unlawfully selling Ryanair flights, by masquerading as Ryanair.com, and then offering customers a substandard service, with additional fees, or by often selling fares that don’t even exist,” Mr Jacobs said.

“While we have no issue with Google advertising in general, it is unfair that it is used as a mechanism to mislead customers.”

He added that Irish and British customers, who bought tickets through eDreams, had particular difficulties getting flight information and in checking in online.