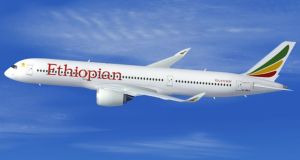 The long term evolution-based (LTE) ground and satellite network will deliver high speed internet access in the air. The technology will allow airlines to benefit from a cost-efficient and future-proof connectivity solution. Lufthansa will be the first airline to trial the programme in the European Aviation Network. Ethiopian Airlines to join economic forum’s global growth club Ethiopian Airlines has been selected to join the World Economic Forum’s Global Growth companies for 2015.

Ethiopian is being recognised as one of 400 global companies with a track record of exceeding industry standards in revenue, growth, innovation and leadership in corporate global citizenship.

The airline is the biggest pan-African carrier and began services from Addis Ababa to Los Angeles via Dublin in June.

Belfast set for major hotel expansion to cater to all tastes The hotel capacity in Belfast is increasing with the announcements of new properties in the next year or two.

Hastings Hotels has already announced the building of Grand Central Hotel in the former Windsor House.

There will be a new boutique hotel at Bank Square and Beannchor has announced plans for a new 55-bed property on Victoria and Ann Street.

Figures from Delta show it had a fine – and busy – summer Delta airlines is keen to show just how busy it was this summer – its busiest ever.

On-time departure was 96.72 per cent and there were 45 consecutive days without any maintenance cancellations. Well done Delta.