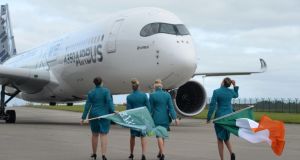 51 international events for Ireland in three years
The Business Tourism team at Fáilte Ireland is already ahead of target for 2015. It has attracted 51 international events to Ireland to take place between 2016 and 2019. At least 20,000 delegates will spend more than €27 million attending events like the Social Media and Critical Care Conference and the International Air Transport Association agm in the city.

The Meet in Dublin website has been upgraded with new features such as a live chat, planning toolkits and a blog. dublinconventionbureau.com

AerCap flies in to mark HQ move from LA to Dublin
AerCap, the largest owner of commercial aircraft in the world, brought a new Airbus A350 into Dublin last week to mark its HQ move from LA to Dublin. AerCap will move into the LXV building on the corner of St Stephen’s Green and Earlsfort Terrace next year. AerCap has ordered 122 of the A350s and Aer Lingus has ordered nine of the A350-900XWB to come into service from 2018.

Consortium buys IHG Hong Kong Hotel for $938m
The owners of IHG Intercontinental Hong Kong Hotel have agreed to sell the property to Supreme Key, a consortium of investors, for $938 million.

IHG will retain the management contract of the hotel for 37 years with three 10-year extensions. The hotel on the Kowloon Waterfront has 503 rooms.

IHG sold Le Grand Hotel in Paris last autumn for $405 million and the Park Lane Intercontinental in London in 2013 for £302 million.

Ancillary airline revenue up eighth year in succession
Ancillary revenue for airlines has jumped for the eighth year in row, to $38.1 billion in 2014. The study of 63 airlines by IdeaWorksCompany sponsored by CarTrawler shows that revenue from the sale of seats, baggage, food, extra leg room and loyalty points increased by more than $2.9 billion last year.

The biggest rise in revenue was among low-cost carriers, up €2.9 billion, while the US major airlines increased revenue by $2.6 billion.

The increase in air travel will further add to the bottom line of airlines this year.