Ready to fly to the US on a 130ft plane with just three toilets? 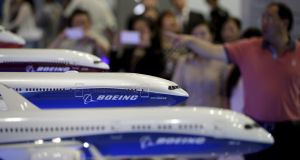 Irish travellers are likely to be among the first to fly across the Atlantic in smaller planes. Photograph: Reuters

The smallest aircraft made by Boeing and Airbus are about to find a new role operating transatlantic routes that were previously the preserve of some of the world’s biggest planes.

The re-engined 737 Max and A320neo jets offer a 15 per cent fuel saving meant to cut costs on the shortest inter-city services. At the same time the revamp has added about 500 miles to their range – just enough to allow the narrow-bodies to span the 3,000 miles between the eastern United States and western Europe.

While eight hours on a 130ft plane with three toilets and one gangway might not immediately appeal to travellers used to the spacious cabins of an Airbus A380, airlines say the smaller jets will open up direct routes that would not otherwise be viable. That would do away with the need to switch between flights at a busy hub.

At the same time people can look forward to competitive fares as carriers seek out smaller airports where access charges are lower.

Norwegian Air Shuttle, JetBlue Airways and Portugal’s TAP are among airlines buying the jets for transatlantic routes, with NAS set to lead the way when it becomes one of the first carriers to get Boeing’s Max 8 next year.

Its initial flights may link Cork and Shannon and Edinburgh and Birmingham in England to smaller airports in New England and the New York area.

“It has huge potential from the smaller cities along the Atlantic coast. But you can’t go into New York as you do with wide-bodies. You must target airports with a totally different cost structure.”

Boeing’s 757, the world’s longest single-aisle jetliner with about 200 seats and a range in excess of 4,000 miles, has been plying the Atlantic for years, with companies including United Continental still deploying the model on routes such as Newark, New Jersey, to Birmingham. Production ceased in 2004, however, leaving those 757s still flying in the twilight of their lives and with fuel consumption way in excess modern models.

The 737 and A320, by contrast, were designed for much shorter flights, with the original 737-100 seating just 85 people and limited to trips of about 1,200 miles. While ranges have increased, the 3,300-mile reach of the 737-800 and -900 is insufficient for fully laden operations on transatlantic routes where jets must carry enough reserve fuel to fly about 500 miles in an emergency.

A handful of carriers operate services at reduced capacity, which cuts the weight of a plane and increases its range, with SAS serving Boston from Copenhagen using an 86-seat 737-700 and British Airways connecting London City airport and New York with an Airbus A318 carrying just 32 passengers.

The only current transatlantic 737 or A320 services with a near-normal load are flown by Canada’s WestJet Airlines and link St John’s, Newfoundland, with Dublin – distance 2,000 miles – and Halifax, Nova Scotia, with Glasgow in Scotland. The 737-700s used have 136 seats.

The UK and Irish routes planned for Norwegian’s 189-seat Max 8s will span about 3,000 miles.

Norwegian ordered 30 of the planes with 220 seats in a single class in July. JetBlue and TAP also plan to deploy the model, which is due to be available from 2019.

The US carrier has agreed to buy 30 A321neos with an option to take some as LR variants, saying it wants an aircraft with “transatlantic range”.

TAP has orders for 10 A321neoLRs, saying it could use them to serve Brazil and possibly the US. Its Lisbon base is about 3,500 miles from both New York and Recife, the South American country’s sixth-largest city.

Aer Lingus is also a likely operator of the A321neoLR across the Atlantic, Willie Walsh, chief executive of parent company IAG, said in July, adding that the jet represents a “fantastic opportunity”.

It already flies 757s to locations including Hartford, Connecticut, typical of the cities smaller planes could serve.

With the LR emerging as a favoured successor to the 757, Boeing is studying designs for a stretch of its biggest Max 9 that would offer much of the range and payload of the A321, or a more elaborate revamp using the larger engines developed for the Airbus jet.

Whatever the outcome, passengers seem certain to be making longer trips on the smallest class of jetliners in coming years.

“For the moment we haven’t really got the planes out there,” said Yan Derocles, an analyst at Oddo Securites in Paris.

1 Are there annual limits on inheritances or gifts to a child?
2 Ireland has EU’s most progressive tax system, study finds
3 Who are Ireland’s 17 billionaires?
4 Netflix isn’t threatened by Baby Yoda and has the chart to prove it
5 My father in a nursing home wants to gift me his house
6 Irish workers now ranked as most productive in world
7 Davos Diary: UCD prof goes batty, Ivanka hits town and Prince Charles takes the stage
8 Inbreeding poses major threat to Ireland’s thoroughbred horse sector
9 IDA chief says State could soon ‘be fighting for a smaller pool’ of foreign investment
10 London fintech group Nucoro to expand in Ireland
Real news has value SUBSCRIBE