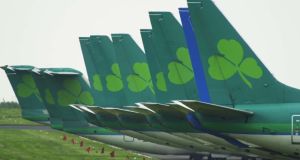 A proposal to cut retired workers’ pensions as part of an overall plan to plug a €750 million hole in Irish Airlines Superannuation Scheme (IASS) has passed a key regulatory hurdle.

The trustees of the IASS, the insolvent retirement fund operated jointly by Aer Lingus and Dublin Airport Authority (DAA), have told the airline that the Pensions Authority has approved proposals to tackle its €750 million deficit and end a four-year-long dispute.

The proposals include a section 50 application, which will result in a reduction of the pensions paid to retired workers drawing income from the scheme.

This is the first use of new legislation that allows such clawbacks from pensioners where a fund is insolvent.

All members of the scheme, including current and former employees of both companies, are taking a cut in benefit. Along with this Aer Lingus has pledged to put up €191 million to fund a new defined contribution plan while DAA is offering €72 million.

The airline said it will begin implementing the plan on January 1st.

However, the Retired Aviation Staff Association has pledged to take legal action to reverse the move.

In a statement on Tuesday, it said that members will lose up to six weeks’ income a year as a result of the move.