Ialpa wants Government to implement recommendations of its own taskforce on aviation, which advocates lifting travel restritions 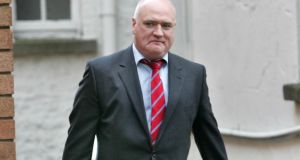 Captain Evan Cullen: “Aviation workers in Ireland have been ignored by government since the Covid-19 crisis began.” Photograph: Matt Kavanagh

Pilots are accusing the Government of ignoring aviation workers since the Covid-19 crisis began in March.

The Irish Airline Pilots’ Association (Ialpa) at the weekend welcomed publication of the Government’s Focus on Aerospace and Aviation, which highlights the need for cash aid for the industry to prevent mass redundancies.

Ialpa president Captain Evan Cullen said: “Aviation workers in Ireland have been ignored by government since the Covid-19 crisis began.”

He called on the Government to implement the recommendations of its own taskforce on aviation, which last month advocated lifting current travel restrictions. Those rules require anyone travelling from countries not on a Government “green list” to self-isolate for 14 days after arrival.

Most EU countries and the UK are not on the list, which means those arriving from many of the Republic’s key trading partners in Europe must quarantine after landing here.

Ialpa’s statement pointed out that the Republic’s travel policies kept the State closed for business as they were among the most restrictive in the EU.

The union noted that many EU states had given airlines loans or aid, and that similar steps were needed in the Republic.

Focus on Aerospace and Aviation was one of several sectoral reports that the Department of Business, Enterprise and Innovation published at the weekend.

The report stated that prolonged disruption of air travel could threaten the Republic’s ability to lure the multinational investors key to creating jobs here.

It confirmed that Irish aviation was among the hardest hit in Europe by coronavirus travel bans, with traffic tumbling 83 per cent in May.

Prolonged disruption of the Republic’s air links with the rest of the world “could also threaten our competitiveness in the foreign direct investment sector”, the report warned.

The report calculated that before the virus aviation supported 140,000 jobs in airlines, airports, aircraft leasing, maintenance, and businesses serving these activities, but airports and airlines are preparing to cut workforces by 25 per cent.