Nice and profitable: How Ryanair revamped itself

Michael O’Leary has told staff to be ‘nice’, but the changes run much deeper than that 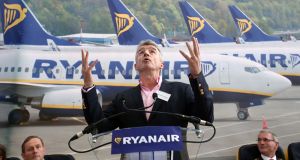 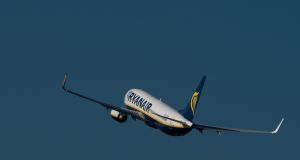 Taking off: Ryanair has bought a fleet of 175 new Boeing 737-800s with a list price of €15 billion which will replace its current fleet in 2017. Photograph: Philippe Huguen/AFP/Getty Images

On Monday, Ryanair is set to reveal a strong set of financial results for the year to the end of March. Analysts estimate that profits after tax could hit over €1.2 billion – or €11 per passenger flown.

This will be a record performance. That is partly due to the sharp fall in jet fuel prices which reflect a collapse in oil markets. It will also be attributed to the new “all-singing and dancing” Ryanair, where smiling and being nice have become key performance indicators.

A narrative has developed around the notion that a simple tilt of the Ryanair customer interface from nasty to nice explains the recent power surge in its business. I disagree.

Something far more profound has happened to the company and its strategy. To understand it in full you have to roll back to the spring of 2013.

At that time Ryanair was already Europe’s most profitable airline. Its management wanted to achieve more. They were poring over monthly data from key competitor Easyjet and noting it was performing well in terms of both passenger volume and profitability.

They also knew that about 70 million passengers (equivalent to 90 per cent of their volume in 2013) were travelling point to point on short-haul European markets, mainly to primary airports, and paying higher fares, but not with Ryanair.

To complicate matters further, they were in the throes of a third bid for Aer Lingus, of which they owned almost 30 per cent.

These factors were all interwoven in the debate that raged about how to plot an expansion strategy. Finding a way to climb a mountain of growth was the challenge. Doing it while staying highly profitable was the hurdle.

At that time, the plan was to continue growing the core Ryanair no-frills, no-nonsense business while using Aer Lingus to attack the segment of the market occupied by airlines linking primary airports and offering a friendlier customer service.

That assumed getting control of the Irish flag carrier which, in April 2013, was no longer achievable.

Implacable opposition from the Irish establishment, trade unions, institutions including the EU and UK competition authorities and Aer Lingus itself killed the third Ryanair bid. Another roadmap was needed.

The idea of launching a new airline with a happy-clappy marketing message, a different brand and a fleet identical to the core was briefly debated to address the 70 million passenger market opportunity.

That was ruled out on grounds of complexity so a third and considerably more radical plan was hatched: re-engineer from the inside out.

Before contemplating any changes in the image of the company, however, two crucial foundation stones were put in place that straddled the summer of 2013.

Without that, any marketing makeover would be doomed to failure.

The first move was a cracking piece of business with Boeing during April 2013 to acquire no less than 175 new Boeing 737-800s with a list price of $15 billion. This was negotiated at a time when Boeing was launching the all-new MAX aircraft.

These will replace the 737 from 2017 onwards, and Ryanair used end-of-line economics on the current-generation jet as leverage to secure favourable terms for each plane.

Aircraft are the single largest consumer of capital in any airline, so getting fleet costs right is a key objective. With this deal Ryanair had the capacity to grow the fleet by 50 per cent without compromising on flight cost per passenger. It has since expanded that order even further to add 100 units of the MAX with options on another 100.

These planes provide extra seats and new, efficient engines which will cut unit costs even more and further improve the carrier’s competitiveness.

The second cornerstone transaction happened in September of that year when the Manchester Airport Group, owners of Stansted airport, cut a deal with Ryanair to facilitate growth at the key London airport.

This multi-year scope deal gave the carrier ultra-low operating costs at its largest base once passenger volume growth was delivered.

Equipped with these core cost advantages, Ryanair was now set to roll out a new phase of growth. In September 2013, chief executive Michael O’Leary attended an investor event in Dublin.

Under questioning, he revealed that the airline planned to change its attitude to customers and become nicer and friendlier. Smiling and asking how passengers found their experience flying Ryanair would be hard-wired into the business, he joked.

Most people there, and many inside Ryanair itself, thought this was the latest of the headline-grabbing but ultimately gratuitous soundbites that often emanated from the business.

Within days things changed within Ryanair itself. With the same ferocity that applied previously to collecting bag charges, a new mantra was broadcast across the company: be nice, or else.

A series of initiatives, including a new user friendly website and app, flying to primary airports and other changes, made the airline more appealing to existing and potential future customers.

The changes to the external skin of the business followed a thorough overhaul of the engine underneath. One without the other would have failed to deliver for shareholders. A spray-painted car without a tuned-up engine usually fails to impress for long.

Combined, an energised cost base coupled with an all-new customer interface opened up a new flank in the long war that is short-haul air travel in Europe, and gave Ryanair a roadmap to advance aggressively from its existing position.

A remarkable aspect of this transformation in the business and its strategy is that it started from a position of strength. Usually a board crisis, financial collapse or a change in chief executive marks an inflection point in a company’s strategic direction.

Ryanair’s makeover happened during a period of high profits. It was led by the current CEO, supported by two deputies who now sit on the board, and was executed by a management team that largely were in place during 2013.

In the last 36 months, Ryanair’s stock market valuation has rocketed from €7 billion to over €17 billion. Its passenger volume has swollen from 79 million in 2013 to 106 million this year. It is arguably the most successful low-cost airline in the world in terms of equity value creation and is a stand-out example of ambitious Irish entrepreneurship.

That outcome is a direct function of radical change.

On Monday, it will be explained, by Mr Nice Guy, as something much simpler.

Joe Gill is director of corporate broking with Goodbody Stockbrokers. His views are personal.