Aircraft cost €11 billion to develop and is expected to have flight test campaign of about 2,500 hours 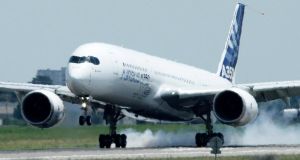 The new Airbus A350 lands at Toulouse-Blagnac airport in southwestern France after its maiden flight today. Photograph: Reuters/Jean-Philippe Arles

Airbus SAS’s new A350 widebody returned from its maiden flight after a four-hour airborne test of the long-range airliner, in a show of confidence that the jet can enter service in late 2014 and challenge Boeing.

Two test pilots and four engineers returned the A350 to the airfield at Airbus headquarters in Toulouse, southwestern France, shortly after 2pm, after they had performed the first flight under the gaze of 12,000 spectators that included workers, journalists and senior management.

The aircraft, which cost about €11 billion to develop, is aimed at competing with Boeing’s two best-selling wide-body models, the new 787 Dreamliner, and the 20-year-old 777, for which Boeing is now promising a successor model, the 777X.

The first flight came days ahead of the Paris Air Show, the annual showdown between the two manufacturers, where long-range aircraft sales are in the spotlight.

At stake is leadership in twin-aisle planes, the workhorses of intercontinental flying that Boeing pioneered and in which it remains dominant.

The test flight handled as predicted, test pilot Peter Chandler said after a four-hour, six-minute round trip. “It felt more like an aircraft at the end of its flight-test programme than one on its first flight,” he said, although some glitches will need to be addressed.

Powered by Rolls-Royce engines, the A350 reached 25,000 feet and a speed of Mach 0.8 knots as Airbus used the flight to gather data needed to achieve certification within about 14 months, flight test engineer Patrick Du Che said. The flight test campaign is expected to clock about 2,500 hours.

1 Varadkar resigns amid warning impasse will hit the economy
2 Billionaire Zara founder and German funds vie for prime Dublin offices
3 Google completes purchase of Treasury Building for €120m
4 Nineteen staff made redundant by Nama share €1m
5 Garda mobile contract win causes concern over Eir’s use of Huawei kit
6 How do you know if you are wealthy? It’s not straightforward
7 A maverick taking on the Irish whiskey establishment
8 Appeals board grants planning for 354 Greystones homes
9 The gadgets that can make travelling a bit more enjoyable
10 AIB lines up former HSBC executive McDonagh as chairman
Real news has value SUBSCRIBE