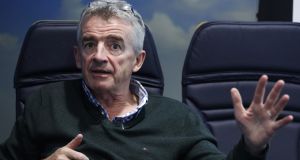 Michael O’Leary is among those who have signed a letter in support of Norwegian Air. Photograph: Bloomberg

High-profile Irish business and political figures including Ryanair’s Michael O’Leary have voiced their support for Norwegian Air International’s efforts to get a permit allowing it to fly to the US.

The US government has “tentatively” granted Irish-registered Norwegian a foreign carrier’s permit but members of Congress are still voicing their opposition to the airline getting final approval.

Aviation unions in the US claim that Norwegian is using its Irish airline licence as a flag of convenience so it can crew its flights with cheap labour, a claim that the airline has repeatedly dismissed.

Norwegian hopes to launch a Cork-Boston service this year as part of an overall plan to offer low cost transatlantic flights.