Peter Bellew is formerly of Ryanair and Kerry Airport 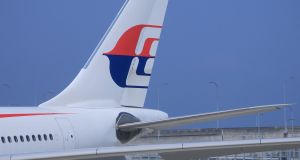 The appointment takes effect July 1st, the airline said in an e-mailed statement on Thursday.

Khazanah took the airline private in 2014 and Mr Mueller was tasked the following year with leading a 6 billion-ringgit (€1.4 billion) plan including 6,000 job losses and cuts to long-haul destinations to restore the carrier’s profitability.

Mr Bellew’s appointment “will ensure continuity in the execution of the turnaround plan and further progress of the overall restructuring effort,” Malaysia Air said in the statement.

Mr Bellew joined Malaysia Air in September from Ryanair, where he ended his stint as director of flight operations at the Dublin-based carrier after various roles since 2006. He previously founded an online travel agency in Ireland and was managing director at Kerry Airport.