German group expanding Irish services on back of growing demand 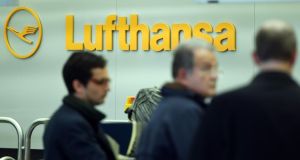 Lufthansa plans to spend €1.5 billion on buying 81 of the defunct Air Berlin’s aircraft and hiring 1,700 of its staff. Photograph: Maurizio Gambarini/AFP/Getty Images

German airline Lufthansa’s planned takeover of part of insolvent Air Berlin’s business will leave it with just 9 per cent of the European Union market, one of its senior directors said on Wednesday.

Lufthansa plans to spend €1.5 billion on buying 81 of the defunct airline’s craft and hiring 1,700 of its staff, but rivals including Irish carrier Ryanair have raised concerns about the move’s impact on competition.

However, Andreas Koester, the German group’s senior director of sales in the UK, Ireland and Iceland, said the takeover would leave the enlarged Lufthansa Group with only 9 per cent of the EU market, behind Ryanair’s 13 per cent.

“It’s very important to remember that even after the acquisition, Lufthansa is still below Ryanair,” he said.

According to Mr Koester, Lufthansa’s figures are based on all carriers’ market shares, including that of Air Berlin, between May 2016 and May 2017.

The European Commission’s competition regulators must first approve Lufthansa’s bid before it can go ahead.

Mr Koester confirmed that Lufthansa subsidiary Swiss plans to add a second weekly flight to its Cork-to-Zurich service on the back of growing demand from the pharmaceutical and other industries.

Lufthansa itself is adding a fourth daily service from Dublin to Frankfurt, while another subsidiary, Eurowings, is flying from the capital to Cologne in Germany.

Meanwhile, Lufthansa is also reintroducing its service between Frankfurt and Shenyang, the capital of Liaoning province in China, which the group said drew strong traffic from Ireland’s Chinese community.