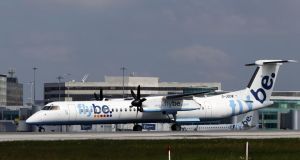 The airline reported a pretax loss of £40.7 million in the year ended March 31st compared to a loss of £6.2 million a year earlier.

“Our results, while expected, are nonetheless disappointing and we have had to make hard decisions in our turnaround plan,” said chief executive Jim French.

Flybe said last month that it had axed hundreds of jobs and would sell its 25 take-off and landing slots at Gatwick airport to rival easyJet, effectively quitting its main London hub.

Flybe, the largest regional European airline, flies to nearly 100 airports throughout the continent - from Aberdeen to Zurich.

European stocks weak despite favourable Chinese output data 11:27
Ireland is 13th most expensive place in the world to live 11:14
New online portal for people seeking to upskill or retrain 09:15
State plans Covid-19 testing for lorry drivers on ferries to France 08:22
China’s economy picked up speed to end 2020 in solid shape 08:12