Kuwait Airways to increase flights through Shannon to JFK 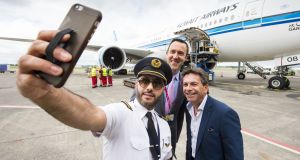 Kuwait Airways is to double the frequency of its transit service through Shannon Airport to New York’s JFK airport from the end of next month to six times a week.

The service began operating three times weekly from the end of June for an initial four-month period, but the airline has now committed to extending the service until February 15th next, with the frequencies doubling from October 31st.

The flight travels from Kuwait to JFK via Shannon to allow for passenger and baggage screening but does not pick up any passengers at the Co Clare airport.

“Not alone in that it is additional business for the airport but it illustrates again Shannon’s suitability as a transit stop for long-haul services between the Middle East and the US but also other east-west routes,” he said.

“Kuwait Airways originally looked at this as a temporary service and we are very encouraged by the fact that they have decided not alone to extend it to February but to double frequencies to daily services, except for Sundays.

“Shannon has an excellent reputation for efficient and quick handling of all transit aircraft. We see opportunities to grow this side of the business and Kuwait Airways’ decision to extend and increase frequencies on their service further validates this.”

It has also emerged that Ryanair will not be renewing a number of services axed or reduced in winter 2016/2017 in next year’s summer schedule.

The Irish Times reported earlier this month that while Ryanair would renew its services between Shannon and Paris Beauvais and Memmingen in Germany next summer, it will cut back on London Stansted and Manchester. This will cut its traffic at Shannon from just under 800,000 passengers annually to 720,000.