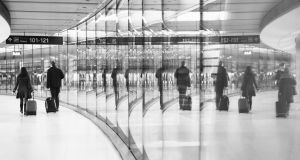 The Government will weigh the possibility of Dublin Airport getting a third terminal in a review of demand at the State’s biggest gateway.

Dublin is set to break 2015’s record of 25 million passengers this year as more than 16 million people passed through the airport in the first seven months of the year. It is planning a new €320 million runway to handle the extra traffic.

Minister for Transport Shane Ross confirmed on Tuesday that the Cabinet will commission a review of demand that will include “the possibility of a third terminal at Dublin Airport”.

Dublin Airport drew criticism from airlines such as Ryanair when it was building its second terminal and proposals for a third facility are likely to involve a similar row.

An airport source said the “need for a third terminal does not arise at present”. Its manager, State company DAA, has a site reserved should it be needed, but this is part of a long-term masterplan.

Aer Lingus and other airlines want Dublin to tackle a squeeze on aircraft parking and facilities for long-haul and transfer passengers as a priority.

Meanwhile the Minister named the Irish Aviation Authority (IAA) as the body responsible for overseeing noise management and restrictions at Dublin Airport under an EU directive due to become law in the Republic.

The news comes as DAA seeks to overturn planning restrictions on its proposed new runway that are designed to limit aircraft noise at night and early in the morning.

Mr Ross’s appointment of the IAA is meant to comply with EU directive 598, which sets guidelines for noise at busy airports and requires governments to appoint “competent authorities” to oversee this.

The IAA is the Republic’s aviation safety watchdog. It intends building a new air-traffic control tower to manage extra traffic resulting from the second runway.

Mr Ross said work had to begin on the new runway soon if it was to be finished by 2020 and avoid losses to tourism. “However, the very legitimate concerns of the residents about increasing traffic at the airport will be taken into account and public consultation arrangements will be made,” he said.

DAA wants An Bord Pleanála to ease a condition limiting flights between 11pm and 7am to 65 as this restricts operations during the busy early morning period, but local groups want it to remain in place.

The authority welcomed news that Minister Ross planned to finalise the noise directive’s implementation and noted that he intends to set out further details in coming days.