Flights from Dublin to Miami would be popular 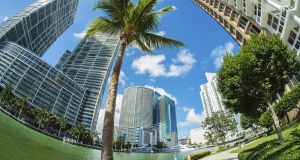 Miami: Aer Lingus has no definite plans to go there, saying “We’re always looking at future transatlantic expansion options but our current focus is on delivering three new routes from Dublin this year to Los Angeles, Newark and Hartford”

Aer Lingus is preparing to launch three new transatlantic routes this year – from Dublin to Los Angeles, to Newark in New Jersey and to Hartford in Connecticut – but there appears to be a fourth that it should also consider.

That is according to industry newsletter Anna Aero which has designated Dublin-Miami as the “unserved route of the week”. The online publication bestows that title on any service that does not exist but for which a large number of people have searched the internet.

Price comparison site Skyscanner provides the data. It found that 60,000 users searched for Dublin-Miami last year, more than 6,500 of them in December when those waves of pre-Christmas storms presumably had people dreaming of sunshine.

Of those that did book something, 55 per cent went on to book flights to Heathrow and 16 per cent opted for New York, places from which there are direct services to Miami ( pictured).

Given those figures, Anna Aero believes the service would attract business with no initial marketing push. So, assuming the Irish carrier were to put its weight behind such a route, it should do well.

Aer Lingus never rules new routes in or out, and says it will weigh up any new transatlantic opportunities as appropriate. Its view of Dublin-Miami is no different. A spokesman said: “We’re always looking at future transatlantic expansion options but our current focus is on delivering three new routes from Dublin this year to Los Angeles, Newark and Hartford.”

The airline announced those three last autumn, within months of its new parent, International Consolidate Airlines Group (IAG), taking over.

IAG bought Aer Lingus to help expand its overall presence in the transatlantic market so it is probably worth speculating that an Ireland-Miami service could yet become a reality. But it does not look like it’s going to happen in 2016.

1 ‘No demand... because there are no people’ at well-known Dublin pub
2 Revised help-to-buy scheme for first-time buyers open for applications
3 Nearly 30,000 could lose pandemic payment if they do not confirm eligibility
4 Post-Covid television starts to shape up – but with missing pieces
5 Divorce: What will it cost and can you afford it?
6 Apple received $250bn dividend from Irish subsidiary in 2019
7 Management of Irish PR group Drury acquire agency from Omnicom
8 Tech giants back legal challenge to Trump’s foreign worker restrictions
9 CityJet to exit examinership after High Court ruling
10 Transferring the family farm without a tax headache
Real news has value SUBSCRIBE