Dublin handled 16.4% more passengers in November 2015 than in corresponding month in 2014 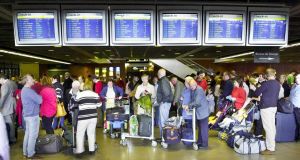 Dublin Airport was one of the fastest-growing in its class in Europe in November 2015, according to figures released by industry body Airports Council International (ACI).

The Republic’s biggest airport said recently that it was on track for a record 2015 when it announced that 23.5 million people had travelled through there in first 11 months of the year.

ACI Europe’s monthly traffic report shows that Dublin handled 16.4 per cent more passengers in November 2015 than it did in the corresponding month in 2014. Its figures rank Dublin as Europe’s second-fastest-growing group-two airport behind Istanbul, where traffic increased by 21.4 per cent.

ACI classes airports that handle between 10 million and 25 million passengers a year as “group two”.

A 12.4 per cent expansion earned Edinburgh Airport in Scotland a top-five ranking in this category. Athens and Prague also made the list.

The ACI figures echo the airport’s own, which indicated that it was in line to break a record set in 2008, when 23.46 million passengers used it. It has yet to release full-year figures, but it is likely 2015 passenger numbers at Dublin will to be close to 25 million.

1 Deutsche Bank under pressure over derivatives sales in Spain