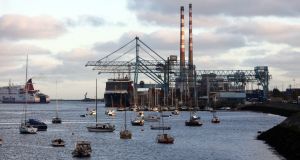 Dublin Port worries it will not have space needed to process increased checks after Brexit. Photograph: Chris Ratcliffe/Bloomberg via Getty Images

The Dublin Port Company (DPC) has told the Commercial Court it fears a standstill of truck traffic in the immediate aftermath of Brexit if its plans to take back land leased for non-core activities are hampered.

It is seeking an injunction over a site at Tolka Quay which it says it needs to provide truck parking and border control posts.

DPC, a State-owned commercial company, wants to use the 3.7 hectare site at Tolka Quay, about 600m south of the the Port Tunnel, as one of its truck park and customs, immigration, agricultural inspection posts after Brexit.

The property, which contains a warehouse and a two-storey office building, is mainly occupied by McQuaid O’Flanagan Warehousing and Transport which had a lease with the former owners of the site.

DPC says it bought the site in January from the former owners and McQuaid O’Flanagan’s lease expired last November.

It is seeking an order preventing McQuaid O’Flanagan trespassing or otherwise interfering with its right to take possession. It also sought similar orders against AYBL Ltd, a company occupying another smaller office building on the site.

The case was admitted to the fast-track Commercial Court on Monday by Mr Justice Robert Haughton.

Kelley Smith BL, for DPC, said there had been constructive engagement with AYBL, and with a number of other smaller companies housed at Tolka Quay, and they had agreed to vacate the premises by 5pm on April 5th.

If they did so, DPC would not seek legal costs against them, she said.

McQuaid O’Flanagan is opposing the injunction and, given the emergency nature and “Brexit sensitivity” of the situation, Ms Smith asked that an early date for the injunction hearing be given.

In an affidavit, Cormac Kennedy, DPC head of property, says in the immediate aftermath of Brexit , a portion of incoming vehicles will be required to park at the port to await inspection from the various State agencies.

“It will not be possible to park on port roads or within the port as to do so would result in matters coming to a standstill”, he says.

Dublin is the largest freight and passenger port in Ireland with roll-on roll-off traffic volumes at levels experienced during the boom, he says. Some 8,000 ships arrive every year and on a typical day some 12,000 lane metres of traffic arrives every morning from Holyhead and Liverpool.

DPC is seeking to ensure there is adequate space for immediate port needs post-Brexit and has redeveloped 14.5 hectares for the purpose in recent years, he said.