Dublin businesses to be asked to fund tourism ad campaign 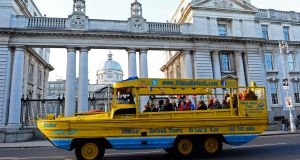 Dublin businesses will be asked to fund an advertising campaign to promote tourism in the capital next year.

Minister for Tourism Paschal Donohoe said he wants to create a model of funding that Dublin businesses will support in return for an advertising campaign that will get people to visit Dublin and Ireland.

“An important area that we will need to explore for the Dublin tourism market is looking at how we can develop a funding model that asks a number of people to make a contribution to a product that will support our business in the long term,” he said.

“A challenge that we have is all of the cities we compete with are doing this. If you look at many of our peer capital cities that we are competing with for weekend breaks, many of them have advertising campaigns that are jointly funded,” he said.

Last week Mr Donohoe said a new group is to be established to increase tourism to Dublin amid concerns that the capital is underperforming compared with other European cities. The new group will be responsible for marketing Dublin and will be funded from public and private sources.

An Bord Bia chairman Michael Carey will head up the new body, called the Grow Dublin Tourism Alliance, which will come under the auspices of Fáilte Ireland.

The Department of Transport and Tourism commissioned a strategy document last year, which found that Dublin is “underperforming against its potential and has the capacity to attract even more tourists than is currently the case”.

It said Dublin was lagging behind what the department called “competitor cities” – Berlin, Copenhagen and Amsterdam – in terms of growth.

Speaking at the end of year review of overseas tourism to Ireland, Mr Donohoe said 2014 was another “excellent year” for Irish tourism. with 7.3 million visitors contributing more than €3.6 billion in revenue to the economy.

Chief executive of Tourism Ireland Niall Gibbons said the Wild Atlantic Way, Kim Kardashian and Kanye West’s honeymoon, Limerick City of Culture and astronaut Chris Hadfield’s promotion of Ireland as a destination, were among the highlights for Irish tourism.

Tourism Ireland plans to welcome 7.74 million visitors to Ireland next year and up to 10 million by 2025.

Mr Donohoe said next year will focus on the promoting the Wild Atlantic Way, the new Dublin Discovery Trail and the British-Irish visa scheme that allows Chinese and Indian visitors to visit Ireland and the UK on a single visa.