Jaguar and Ford confirm thousands of job losses across Europe

Brexit partly to blame for redundancies, along with slump in sales of diesel cars 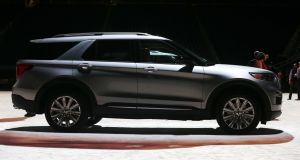 A Ford Explorer (SUV). Cuts at Jaguar come on the same day that Ford said it would cut thousands of jobs in Europe as it tries to turn around a region that has been a drag on earnings for years. Photograph: Jeff Kowalsky/Bloomberg

Jaguar Land Rover plans to eliminate 4,500 jobs worldwide as the UK’s biggest car-maker responds to a sales slowdown caused by Brexit, flagging demand for diesel-powered vehicles and a downturn in China.

The layoffs, representing roughly 10 per cent the company’s workforce, come on top of the 1,500 people who left in 2018, the company said on Thursday in a statement.

“We are taking decisive action to help deliver long-term growth in the face of multiple geopolitical and regulatory disruptions as well as technology challenges facing the automotive industry,” chief executive Ralf Speth said in the statement.

The measures were aimed at “safeguarding our future, and ensuring that we maximise the opportunities created by growing demand for autonomous, connected, electric and shared technologies”.

The cuts at Jaguar come on the same day that Ford said it would cut thousands of jobs in Europe as it tries to turn around a region that has been a drag on earnings for years.

Car-makers are contending with a slowing global marketplace, and Brexit has been a particular drag on the UK.

In June the company said it would move production of the Discovery sport utility vehicle (SUV) to Slovakia from Birmingham to make room for future electric cars. The company has said that move will cost 1,200 jobs.

Jaguar sales increased 4.2 per cent in 2018, while Land Rover registrations dropped 5.7 per cent, according to the Society for Motor Manufacturers and Traders industry group in the UK.