Dublin Airport may raise passenger fees to pay for runway 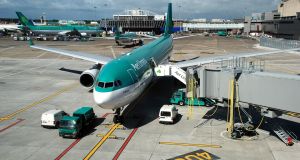 Dublin Airport could raise passenger charges to pay for the new runway that it looks increasingly likely to build, after passenger numbers hit a record 25 million last year.

Chief executive Kevin Toland said the company will weight up its plans for a new runway in light of the growth in passenger numbers, which is likely to continue.

He acknowledged that the airport may increase passenger charges by 60c a head to help pay the estimated €250 million cost of the new runway, a move that could anger airlines such as Aer Lingus and Ryanair.

The Commission for Aviation Regulation has capped Dublin’s passenger charges at €9.87 for 2016, but has ruled that if passenger numbers reach 25 million, the airport can pass on the cost of building the runway to customers.

Mr Toland stressed it was too early to say if that would happen and pointed out that the DAA would decide on the runway later this year after assessing whether the growth is sustainable. “I would not jump to any conclusions,” he said.

Dublin airport is hiring 180 people in the coming months to cope with the growth. It took on 170 new staff last year.

Airlines added 22 new routes from the airport in 2015 and boosted capacity on 39 existing services. DAA expects passenger numbers to continue to increase this year as carriers add 11 new scheduled services.

Minister for Transport Paschal Donohoe said that the airport’s ability to grow was very important for the national economy.

“If those trends that we are seeing were to continue then there would be a need for a second parallel runway,” he said.

Dublin Airport supports or facilitates a total of 97,400 jobs in the Republic and contributes €6.9 billion a year to the economy, according to a study by economic consultants Intervistas.

Both men confirmed that Norwegian Air International’s plans to launch a Cork-Boston service in the spring face political opposition in the US, where powerful pilots’ unions are attempting to block it.

Mr Donohoe said that the Government is exerting all the influence that it can with both the US and European authorities.