At issue is purported termination of €4m contract 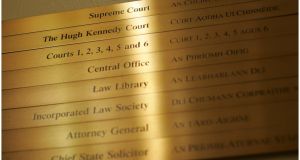 At the Commercial Court on Friday, Mr Justice Brian McGovern granted DSG injunctions restraining Stena breaching the contract with DSG or transferring any of DSG’s contractual obligations to any other party.

The order applies until the full hearing of proceedings over the purported termination of the contractual relationship between the companies.

DSG had operated a contract, worth some €4m annually, with Stena Line Limited to provide services to allow Stena’s ferries dock at Dublin port for more than 20 years.

The services include stevedoring, checking-in and out of passengers, loading and unloading freight and administration services.

The contract was renewed periodically but, on August 31st last, Stena informed DSG it was ending the agreement and gave DSG three months notice.

DSG, which provides services at all of Ireland’s major ports, claims the termination notice is in breach of an oral agreement negotiated with Stena in 2015 for provision of services at Dublin Port until 2022.

In its proceedings against Stena, DSG claims the termination notice is invalid and of no effect and the 2015 agreement is binding.

The claims are denied and in related proceedings against DSG, Stena claims it is entitled to terminate the agreement on three months notice based on a 2011 agreement between the parties.

Stena, which has entered into a contract with another party to provide the services at Dublin Port also seeks a declaration its termination notice is valid.

At the Commercial Court on Friday, Mr Justice Brian McGovern granted DSG injunctions restraining Stena breaching the contract with DSG or transferring any of DSG’s contractual obligations to any other party. The injunction also prevents Stena removing or evicting DSG from any of properties or locations in Dublin Port where it operates.

The judge said he was making the order arising from the business relationship between the parties for many years. Failure to grant the injunction could have a significant impact on DSG’s employees, he said.

He was also satisfied both parties had, in their respective cases, raised fair issues to be tried, and damages would not be an adequate remedy for DSG if no injunction was granted.

The balance of convenience also favoured the granting of the injunction, he ruled.