Cruise industry listing badly after it is hit by Covid-19 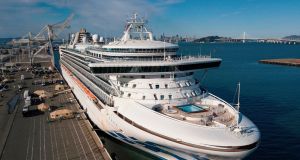 The Grand Princess at the Port of Oakland in California. The cruise ship was turned away from San Francisco. Photograph: Getty Images

When the 2,666 passengers and 1,045 crew of the Diamond Princess set sail from Yokohama, near Tokyo, on January 20th, they had expected to disembark at the same port 15 days later on February 4th. Instead a passenger who got off the ship in Hong Kong tested positive for coronavirus, and their ordeal began.

Passengers were forced to remain on board the ship as they were tested for a virus that was all around them. Hard-pressed, under-equipped crew with no expertise or training in infectious diseases were thrust into the role of monitoring a failed quarantine. Eight people died and more than 600 were infected, with the disembarkation taking all of February to complete.

Passengers said they felt like sitting ducks. They were. Incredibly, their particular horror story was not a total outlier. After some people on board tested positive for Covid-19, the Grand Princess, from the same Princess Cruises line, was turned away from San Francisco. Pensioners spent days in windowless cabins.

Meanwhile, Holland America’s MS Westerdam was denied entry to five countries before passengers were eventually allowed to disembark in Cambodia. There were no confirmed cases of Covid-19 on board.

Princess Cruises and Holland America share a parent in Carnival Corp, by far the biggest cruise operator. Carnival’s share price was choppy at the best of times. Now, in these worst of times, its value has sunk by billions. On Thursday, Princess Cruises suspended all sailings for 60 days, while Carnival’s Costa Cruises won’t sail until at least April 3rd.

The next biggest operator, Royal Caribbean, escaped the worst of the headlines, but it isn’t exactly doing swimmingly: the company recently tapped a $600 million credit line and is now reported by Bloomberg to be seeking more.

Airlines may have been savaged by this pandemic, but when it’s over travellers will likely regard flying as the same minor nightmare it always has been. The crisis facing the cruise industry is much more fundamental.

Those who survived the Diamond Princess are set to wind up as a case study in medical journals. Those trapped on the Grand Princess suffered the ignominy of their fate being cruelly mused over before the cameras by Donald Trump.

How do you sell a holiday with the proven capacity to turn into such a unique torture? Whenever anything goes wrong, cruise ship passengers are clearly far too vulnerable to being left all at sea. Few will forget it.