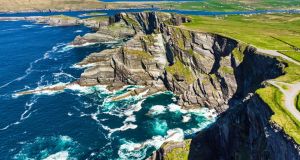 Kerry: Tourism is the county’s biggest industry and one in five people are employed within it. Photograph: iStock

“Multiple” hotels are set to shut down in Kerry as they scramble to deal with floods of cancellations and sudden limits on events and gatherings, one hotelier has warned.

The new limits and the fall-off in corporate, domestic and international business will see some businesses failing to survive, Kerry’s spokesman for hoteliers, Padraic McGillicuddy, has said.

Tourism is the county’s biggest industry and one in five people are employed within it. Kerry is the State’s second-biggest tourist area outside Dublin.

Mr McGillicuddy of Ballygarry House Hotel in Tralee said the announcement on Thursday at 11.30am that limits were to be imposed by 6pm when people were already checking in for large weekend events been “very damaging”.

The tourism industry would have appreciated a breathing space until Monday, he said. Urgent meetings were being held in most hotels in Kerry scrambling to cope with the sudden downturn.

“Most hotels, multiples of hotels, in Kerry are looking at the possibility of shutdown,” Mr McGillicuddy said, adding that staff cuts and reduced working hours were being implemented.

He pointed to a series of blows that began with the cancellation of parties and events from the corporate world and was followed by reduced flights. The county usually attracts more than 1.8 million tourists annually, with one million of these coming from overseas.

Tens of millions of euro are falling off the books in Kerry, he said. Online booking has halted.

“We understand the threat of this virus. But we need guidance, we need leadership,” he said.

In the case of one wedding of 150 people on Saturday, 100 guests were going to the church and a video link was being set up in a local pub where the remaining fifty guests were being accommodated.

Joan Moriarty in the Irish Pub Shop waved her hands at a crafts and souvenirs shop empty of people when asked about business.

“We were tipping away nicely. Two days ago, it fell off the cliff,” she said.

“The town’s hoteliers, restaurateurs, publicans, retail service providers, entertainment venues and service industries look forward to extending a warm welcome to those who wish to enjoy all the town and the park has to offer, both indoors and outdoors,” the Killarney Chamber of Commerce and Tourism said on Friday.

1 Goldman Sachs in talks to take over Blanchardstown shopping centre
2 How much will a Covid-19 vaccine cost?
3 ‘French people are pretty relaxed. They don’t pander to scaremongering or hysteria’
4 Aryzta’s new chairman has five weeks to come up with a plan
5 Journey’s end? Car rental companies fight for survival
6 Vendors adopting ‘wait-and-see’ approach in sub-€20m market
7 Ecomm Merchant Solutions sees turnover soar to €11.1m
8 Michael O’Leary is the boss you want to lead an airline out of crisis
9 Bank of Ireland executive Sean Crowe to leave at end of year
10 Q&A: What is the National Asset Management Agency?
Real news has value SUBSCRIBE