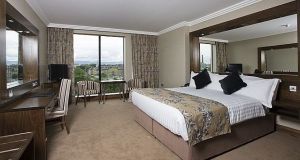 The Ashling Hotel in Dublin is one of the hotels owned by Foxfield Inns Designated Activity Company.

A High Court judge has urged that further efforts be made to mediate a dispute between family members over the running of a company that owns hotels in Dublin and Galway employing 180 people.

Mr Justice David Barniville issued the appeal when making directions on Monday for progressing proceedings brought by Mary Flannery under section 212 of the Companies Act 2014.

Her two brothers, her sister-in-law and an accountant all deny her claims they acted in an oppressive manner infringing her rights concerning the running of Foxfield Inns Designated Activity Company.

As well as the Ashling Hotel in Dublin and the Imperial Hotel in Co Galway, Foxfield has acquired commercial and residential properties which are rented out. A subsidiary of the firm owns and runs the Eglington Hotel in Salthill, Co Galway, used as a direct provision centre.

Kevin, Frank and Mary Flannery are equal shareholders and directors of Foxfield, while Sheelagh Flannery is a director but not a shareholder.

The action is also against James Norton, the company’s auditor and accountant, and Foxfield Inns DAC, both of Carysfort Avenue, Blackrock, Co Dublin.

Mary Flannery had not brought the case against her sister Andrena Moynihan, also a director and shareholder, and no allegations were made against her. Ms Moynihan has since been joined, on her own application, as a respondent.

During a directions hearing on Monday, Bernard Dunleavy SC, for Sheelagh Flannery, said that because the case involved deep personal issues, his client favoured another attempt at mediation.

Counsel for the other respondents supported Mr Dunleavy’s suggestion. Counsel for Mary Flannery, while indicating mediation was not her preferred option, did not oppose it.

The judge noted the court had been presented with two rival sets of directions as to how the matter should be advanced, and that there may be discovery applications.

Given the nature of the dispute and the relationship between the parties, and the impact on the very substantial business involved, things should be done quickly where it was possible to do so, he said.

He was satisfied to approve the directions proposed on behalf of Mary Flannery, which would see the matter return before the court on June 21st.

This was a very difficult case and various parties suggested it could be resolved by mediation, he said. He considered, despite an unsuccessful attempt at mediation before a leading and experienced mediator, and while not ruling not an alternative dispute resolution procedure, it was in everyone’s interests to re-engage in mediation.

This dispute involved personal and commercial issues with potential to impact on this very substantial business for years, and he would strongly urge the sides to re-engage in mediation, he said. That would not interfere with the timetable for progressing the case, he added.

Addressing concerns expressed by Gabriel Reynolds BL, for Mary Flannery, about herself and other family members being distressed by matters in media reports of the case, the judge said the Commercial Court’s practice since its inception is that affidavits filed in court are deemed to be available to the media to be reported on.

Because there is no time to have affidavits formally opened, they are deemed to be in public unless there is an order to the contrary and there was no such order in this case, he said.