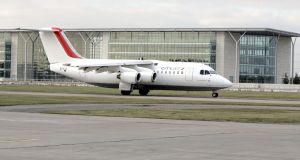 Latest accounts for CityJet show it achieved turnover of €177.3 million in 2014, down from €220.5 million a year earlier. Photograph: Mac Innes Photography

Irish airline CityJet reduced its pretax losses by 21 per cent last year to €30.5 million, a period when the company ceased to be owned by Air France-KLM.

Latest accounts for the Swords-based airline show it achieved turnover of €177.3 million in 2014, down from €220.5 million a year earlier. This included a reduction in revenue of €9 million from its arrangement with Air France, where it has switched from being a franchisee to contract flying.

CityJet also took an impairment charge of €10.9 million last year relating to the carrying value of its investment in subsidiary VLM.

The airline also implemented a cost-reduction programme in mid-2014 to reduce its overheads, and has eliminated a number of loss-making routes after the company was acquired by Germany’s Intro Aviation.

CityJet founder Pat Byrne, who returned to the airline in February 2015 as executive chairman, said the losses reflected a period of “significant change” for the company.

“Changes in the senior management team, together with fresh funding support, has seen a focused approach to cost reduction and business development in 2015, making this a transformational year with a significantly improved trading performance.”

He said the airline had made major changes to its scheduled network this year, with the elimination of loss-making routes and growth in traffic volumes, while also securing a wet-lease deal with Scandinavian carrier SAS, which has contracted for eight aircraft, starting in March 2016.

In October, CityJet placed orders for 23 new aircraft and options on an additional 16 to deliver a “great future” for the airline, Mr Byrne added.

CityJet currently employs more than 650 staff, with bases at Dublin, London, Paris and Helsinki, the latter through its acquisition of Finnish airline Blue1 this month. Five aircraft are based in Paris operating services on behalf of Air France.