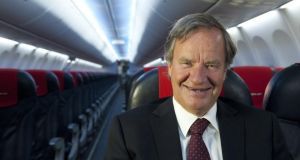 Bjorn Kjos, chief executive of Norwegian Air Shuttle. The airline has been seeking to launch a low-cost transatlantic route via the Republic

Norwegian Air Shuttle, which is seeking to launch a low-cost, long-haul airline from the Republic, reported a smaller than expected increase in third-quarter earnings on Thursday, due to the impact of a weak crown and flight delay costs.

Norwegian has been expanding rapidly with new bases around Europe in places like Britain and Spain, and this summer started flying between London and New York, taking on one of the most competitive markets in aviation.

Its capacity, or available seat kilometres (ASK), will grow by 35 per cent this year, in line with its previous guidance, before slowing to five percent next year as the fleet expands by just four aircrafts.

“The combination of a weak Norwegian crown, the delayed approval from the US Department of Transportation and costs associated with flight delays, affected the results this quarter,” the company said in a statement.

Norwegian, Europe’s number three budget airline behind Ryanair and easyJet in terms of passenger numbers, expects to expand with four planes from the end of this year to year-end 2015, resulting in a fleet of 99 aircraft. In 2016, the company expects to have 117 aircraft. The company had 6 planes at the end of 2002.

Norwegian plans to operate low-cost, long-haul services connecting Europe with the US and Asia using its Dublin-based subsidiary, Norwegian Air International, whose Irish licences mean it is covered by air travel agreements between the EU and non-European countries.

US regulators in September decided to slow Norwegian’s quest to operate in the United States however, where unions have said the airline pays low wages and does not meet employment standards.

“The costs associated with the long overdue application before the US Department of Transportation for a foreign air carrier permit for Norwegian’s Irish subsidiary, Norwegian Air International were also considerable,” the company said.

Norwegian shares were down 4 per cent on Thursday. It trades on a forward 12-month price-to-earnings ratio of 16.4 with a premium to Ryanair’s 13.7 times multiple and EasyJet’s 11.7 times.