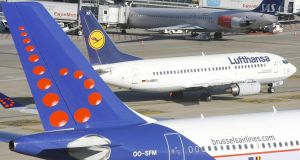 Lufthansa subsidiary Brussels Airlines will launch a new service from Belfast to the EU capital from next month.

Lufthansa subsidiary Brussels Airlines will launch a new service from Belfast to the EU capital from next month.

The German airline flew 13 per cent more passengers on its Irish routes last year than in 2014, according to group regional director, Christian Schindler.

He confirmed that its subsidiary, Brussels Airlines, plans to launch a five-times-a-week service from Belfast to the Belgian city from next month.

While Brussels is launching the route from Belfast City Airport on time for holiday demand, Mr Schindler stressed that the service would be year-round.

“Brussels is the capital of Europe and there is a lot of interaction between the two places,” he said.

Much of the initial traffic on the route is likely to be in-bound but that should even up over time.

The airline will begin using a 100-seater RJ100 aircraft, but will move up to an Airbus 319, which generally have more than 150 seats.

Lufthansa, which also owns former flag carriers Swiss and Austrian, saw demand grow across all its Irish routes in 2015.

Mr Schindler described that 13 per cent growth as a“fantastic” figure, particularly as the increase in passenger numbers outstripped the number of seats that the airline added.

Services to Geneva, Munich and Vienna all performed strongly. The group also noted that travellers are using its network to fly on to longer-haul destinations in the Americas and Asia.

Lufthansa is still dealing with the fallout from a strike that halted services, including those from the Republic, last November.

Talks on a deal are continuing between the group’s management and workers, Mr Schindler said.