Brexit: ‘Farmers are a resilient bunch. We have to get on with it’ 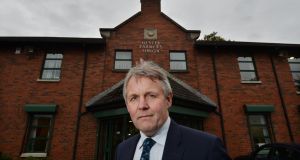 President of the Ulster Farmers’ Union Barclay Bell: “If we went out with a very negative message at the moment, farmers would be in despair.” Photograph: Alan Betson

Barclay Bell, who farms 200 acres near Rathfriland in Co Down, received several telephone calls on the Friday morning after the Brexit referendum result, including some from people who actively campaigned to quit the European Union.

“Some were pro-active leavers and they were saying things like: ‘I am sitting here in a state of shock. I am not sure what I have done’. A lot of people saw this as more of a protest vote; they did not think it would ever happen,” he told The Irish Times.

Bell, on the other hand, had voted to remain. The president of the Ulster Farmers’ Union, he had believed that in the absence of any compelling arguments to leave it was probably best to remain, particularly because of EU subsidies.

In all, Northern Ireland gets about £260 million in EU subsidies: equalling roughly 87 per cent of all farmers’ earnings. Such subsidy might lead one to believe they voted overwhelmingly to stay in the union. That was not the case.

David Campbell, who farms 250 acres on Islandmagee in Co Antrim, thinks farmers went four to one to get out of the EU. Bell reckons the vote was more likely to have been 50:50.

Of the two farmers, Campbell is by far the more optimistic. But they both agree that when finally British prime minister Theresa May figures out specifically what she means by “Brexit means Brexit” that Northern Ireland farmers will just have to make the best of it.

His main focus is on the farm which is very much a family business. He met his wife Linda when they both were studying agriculture at Queen’s University in Belfast. Their older son, David, “looks after the milk” while their younger son, John, “concentrates on the tractor work”.

The UUP favoured Remain but Campbell was a campaigning Brexiteer. “I felt if David Cameron had come back with some degree of meaningful reform that would have persuaded me and a lot of others like me to support him. But the fact that Europe did not even appear willing to give him as much as a fig-leaf of reform really meant that we did not have much need to debate it as a family.

“I think the European Union itself is probably in terminal decline now. I think the UK vote will lead progressively to other EU countries starting to reconsider their position, including I have to say the Republic of Ireland.”

He says no one should be surprised so many farmers wanted out. “Twenty-five years ago I was getting 16-18 pence per litre of milk, now I am getting 18 pence when running costs have increased exponentially since then.”

Where many are uncertain about Brexit, Campbell is gung-ho. If Europe wants a tariff war then bring it on is his view. “Europe is not going to disadvantage itself and that is what it would be doing if it started to impose tariffs on our products going to Europe because we would simply respond by imposing tariffs on their products.”

Rather than a hard border with the Republic, he says modern, electronic technology should be used “to ensure people, goods and services can travel as smoothly as possible” between the jurisdictions. “I think that with goodwill all round the island itself can move forward together.”

Sixty-year-old Bell agrees with Campbell about the EU needing reciprocal arrangements with the UK to protect its own markets, but only up to a point: “Who knows? The French will strike a hard deal.”

His family has farmed in Rathfriland since the 1700s. It’s a largely arable farm with some sheep. Ten years ago he diversified into peony roses which “has worked well for us”.

As with Campbell he is glad of the commitment from the British chancellor of the exchequer Philip Hammond to maintain the same level of EU funding to farmers until 2020: “It gives us a bit of a breather, but 2020 is not that far away.”

In 2013 and 2014, under the EU Common Agriculture Policy, Northern Ireland’s 30,000 farmers derived 87 per cent of their income from European subsidies. The North’s Department of Agriculture, Environment and Rural Affairs says that figure last year dropped to about 63 per cent with subsidies totalling £287 million compared to income of £182 million. The department figures illustrate it is a tough business. Farming was worth £350 million in 2015 compared to £480 million in 2013.

Taken with the agri-food sector the industry is worth more than £1 billion for Northern Ireland – £720 million from agri-food plus £350 million from farming. At the moment he feels there are too many questions and not enough answers – “a lot of it is hypothetical at the present time”. He is nowhere near as sanguine as Campbell. What, he wonders, will happen the milk, beef, sheep, pigs and poultry that “travel up and down the road every day” across the Border. Will there be tariffs and border restrictions?

He is not at all confident about farmers seeing less paper and computer work. “My fear is that the British government will just cut and paste the existing EU rules.”

But amid the uncertainty he observes the duty of hope. “We are a resilient bunch. We are going to have to get on with it; there is no turning back now; we are going to have to try to make the most of it.” But “huge, huge challenges” are posed by Brexit. “The industry has been in a bad-enough place over the past number of years. If we went out with a very negative message at the moment, farmers would be in despair. We are not trying to give them false hope, but we are trying to give them some hope. We are going to try to make this work.”