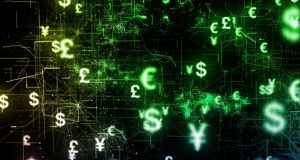 According to the study, blockchain technology could lead to lower fees for consumers, improved regulatory oversight and better preparedness against financial bubbles.

Blockchain, the technology behind bitcoin will become the “beating heart” of the global financial system in the years to come with 80 per cent of banks expected to have initiated projects focused on it by 2017.

A new 130-page report from the World Economic Forum (WEF) reveals that $1.4 billion (€1.25 billion) has been invested in blockchain over the last three years and more than 2,500 patents have been filed.

It also says more than 90 central banks around the world are currently discussing use of the technology.

The report, which took 12 months to complete and includes input from more than 200 financial services-related organisations, is seen as a major endorsement of the technology, which has previously come in for criticism due to its links with bitcoin, a virtual currency popular with criminals.

The forum predicts blockchain, which is also known as distributed technology ledger (DTL), will fundamentally alter the way financial institutions do business around the world.

The report says blockchain “has great potential to drive simplicity and efficiency” in financial services and “will redraw processes and call into question orthodoxies that are foundational to today’s business models”.

“Our findings suggest this technology has the potential to ‘live-up to the hype’ and reshape financial services, but requires careful collaboration with other emerging technologies, regulators, incumbents and additional stakeholders to be successful,” the report said.

According to the study, the technology could lead to lower fees for consumers, improved regulatory oversight and better preparedness against financial bubbles. However, WEF said blockchain’s impact is likely to be mostly limited to the back-end, with major disruption through innovations such as bitcoin less likely to transform the industry.

“Rather than stay at the margins of the finance industry, blockchain will become the beating heart of it,” said Giancarlo Bruno, head of financial services industries, World Economic Forum. “It will help build innovative solutions across the industry, becoming ever more integrated into the structure of financial services, as mainframes, messaging services and electronic trading did before it.”

A recent report from consultants PwC, published in late June, also predicted a rosy future for blockchain, suggesting the technology would lead to a “revolution” across the fintech sector.

Although WEF said distributed ledger technology will be transformative it warned it is not a panacea and should be viewed as one of many technologies that will form the foundation of next-generation financial services infrastructure.