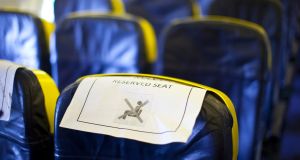 In 2015, Ryanair earned $1.7 billion (€1.5 billion) in ancillary revenue, pitching the airline as the sixth biggest earner among 67 global airlines, according to an annual review of ancillary revenue of top-performing airlines by consulting firm IdeaWorksCompany. Top of the table is US airline United, followed by American, Delta, Air France/KLM and Southwest Airlines, upon which Ryanair once modelled itself.

Like many other low-cost airlines, Ryanair operates an “a la carte” model. This means low-cost flights, with passengers then having the option to increase their spend by adding optional extras such as checked bags, seat assignments, priority boarding and onboard treats.

Ryanair’s 2015 ancillaries haul represented some 24 per cent of the Irish airline’s total revenue, up from 19.3 per cent in 2008, and positions Ryanair fifth in terms of ancillary revenue as a percentage of total revenue, behind Spirit, Allegiant, Wizz Air and Jet2.com, and ahead of competitors EasyJet (10) and Aer Lingus (22). Southwest brings up the rear of the table, with ancillaries accounting for just 10.7 per cent of its total revenue.

More startling is Aer Lingus’s decline. Back in 2008 it was a top-three performer for revenue per passenger, principally on the strength of its a-la-carte services such as checked baggage, pre-ordered meals and inflight wifi; today the carrier does not place in the top 15. However, it still generates revenue per passenger of $22.64 – considerably more than Ryanair.

United Airlines has nearly doubled its ancillary revenue per passenger over the period by growing bag fees, developing its economy-plus product and stretching the revenue boundaries of its MileagePlus frequent-flyer programme.