Analysis: UK ruling is no surprise, except to Ryanair 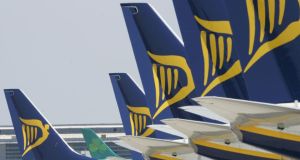 Ryanair came out fighting and warned that if the commission maintains this position in its final ruling in July, it will take it all the way to the British Court of Appeal. Photograph: Alan Betson

Yesterday’s provisional ruling by the UK’s Competition Commission that Ryanair may have to sell all or part of its 29.8 per cent stake in Aer Lingus was not unexpected.

Nor was Ryanair’s reaction: true to long-established form, the low-cost airline came out fighting and warned that if the commission maintains this position in its final ruling in July, it will take it all the way to the British Court of Appeal.

The commission began an inquiry into the controversial shareholding 11 months ago, focusing on its likely impact on competition between the two airlines on the services that they fly between Ireland and Britain. It found that it gave Ryanair the power to influence Aer Lingus’s commercial policies, and consequently arrived at the provisional conclusion announced yesterday.

While Ryanair may not like it, Niall Collins, head of EU and anti-trust law at Dublin solicitors’ firm Mason Hayes Curran, says that the Competition Commission would be operating fully within its jurisdiction to demand the full or partial sale of the Ryanair Aer Lingus stake.

Given that Ryanair has held the stake since 2006, when it initially spent around €340 million building a 25 per cent position to support its first bid for its rival, why has no other authority, Irish or European, done this before?

Collins says that this is down to a difference between competition law between Ireland and the EU on the one hand, and the UK on the other. “Under the EU merger control rules, the acquisition of ‘control’ is defined by reference to the ability to exercise ‘decisive influence’ over the affairs of a company,” he says. “However, UK merger control rules are centred around the ability to exercise ‘material influence’, which is a lesser standard.” As a result, if the regulator considers that a minority stake lessens competition, it can demand that it is sold.

Policies
It has already done this. In the BSkyB-ITV case in 2007, Collins points out that the commission concluded that Sky’s 17.9 per cent stake in ITV allowed the former to materially influence the latter’s policies. It ordered that the holding be reduced to below 7.5 per cent.

In its statement yesterday, Ryanair argued that the Competition Commission’s ruling infringes its duty of “sincere co-operation” with the EU as it contradicts a finding by European Commission that competition has intensified on the routes in question.

However, Declan Walsh, lecturer in competition and EU law at University College Cork’s faculty of law, says that if the European Commission and a national authority are investigating the same competition issue, then it is Europe that holds sway.

“But,” he says, “that does not take from the UK Competition Commission’s right to reach a different conclusion.”