Airbnb takes on tourism industry with move into excursions 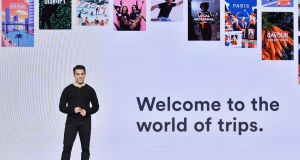 Airbnb chief Brian Chesky at the Airbnb Open this week, a three-day gathering of employees, hosts and celebrities in Los Angeles. Photograph: Getty

Airbnb is taking on the tourism industry by offering travellers excursions and experiences hosted by locals, an ambitious expansion which will allow people to plan entire trips through the home-sharing site.

The redesigned app is live and works for a dozen cities, including London, Los Angeles, San Francisco, Paris, Tokyo and Nairobi, and will spread to dozens more next year and eventually thousands, the company said this week.

Brian Chesky, the company’s chief executive, made the announcement at the start of Airbnb Open, a three-day gathering of employees, hosts and celebrities in Los Angeles.

“If you want to travel, you basically end up on a research project,” Mr Chesky said. “We want to fix this.”

Airbnb will create a holistic travel experience, said Mr Chesky. “This is not a tour. You participate. You are immersed...this is literally just the beginning.”

Critics say that instead of ordinary people renting out spare rooms in a benign cultural and financial exchange, many hosts are commercial operators who fuel rent rises, evictions and gentrification – a reality Airbnb allegedly blurs by withholding and massaging data.

The next big battle is in LA where the city council will soon debate whether to toughen rules.

A coalition of tenants, community activists, labour leaders and business allies is due to rally outside the company’s jamboree this week to try to engage hosts and pressure city authorities.

“We are very concerned at how short-term rents are perverting our housing market and raising our rents,” said James Elmendorf, of the advocacy group Los Angeles Alliance for a New Economy. “So we are out there educating Airbnb hosts about their responsibilities so they’re not just hearing from the company.”

Mr Chesky, who at 35 is one of the world’s youngest billionaires, channelled the spirit of Steve Jobs’s Apple product launches in Thursday’s announcement, wearing all black and promising transformative change in a slick presentation. Employees, plus some of the 200 journalists Airbnb flew in for the event, cheered and applauded.

Gwyneth Paltrow and Ashton Kutcher will sprinkle Hollywood glitz when they address some of the 7,500 hosts on Saturday.

Mr Chesky billed the company’s move as empowering travellers to connect with other people and have authentic experiences they would not otherwise have as tourists. The presentation showcased hosts including an astro-photographer in LA, a jazz pianist in Havana and a lifestyle blogger in Nairobi.

Experiences can last a few hours or several days, said the chief executive. Half are priced below $200. “Everything powered by people. The magic is in the people.”

Mr Chesky evoked the company’s origin in 2007 when he and co-founder Joe Gebbia started hosting people on an air bed in their San Francisco apartment, a real-life Silicon Valley fairytale.

“It’s the next really big chapter for us,” said Chris Lehane, Airbnb’s head of global policy. “It has real potential to fundamentally transform how travel and tourism works.”

Hosting could be a lifeline for people displaced by robotics and other economic forces, said Mr Lehane, a former political adviser to Bill Clinton and Al Gore.

“It’s a boost to my business. I had the structure already,” said Kike Correa (26), who takes clients paddleboarding, snorkeling and scuba diving in the Florida Keys.