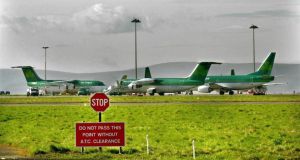 Unions at Aer Lingus have moved to distance themselves from comments Sunday that supported the takeover of the business by British-based rival IAG.

Myles Worth, secretary of the Central Representative Council, a grouping of staff representatives from the company’s trade unions, said on RTE that it had changed its stance on the bid after IAG chief executive Willie Walsh laid out its growth plans for the Irish airline. Mr Walsh told an Oireachtas committee job cuts would be minimal and would be far exceeded by new roles as IAG expands Aer Lingus’s fleet.

“The danger of this going away is that the company could eventually go into a downward spin . . . ” Mr Worth told RTÉ.

“There doesn’t seem to be an immediate threat to the company but if this bid was to fail and the share price goes down, there’s a likelihood that the new CEO would have to put together a very aggressive cost-cutting plan.”

However, union sources last night said the comments were premature and that there was a long way to go before any decision is made.

In a letter to incoming airline chief Stephen Kavanagh, Impact, which represents 1,750 cabin crew, pilots and administrative staff at the airline, said: “The points made, particularly those that purport to reflect that the majority of staff in the company and their trade unions were in favour of the proposed IAG takeover of Aer Lingus,were not authorised by us and are in fact far from the case.”

“Impact still asserts that this takeover is bad for Aer Lingus staff, threatens their jobs, and the connectivity assurances stated publicly are bad for Ireland. We hope to discuss these with you next week.”

In a separate communication to Mr Kavanagh, CRC chairman Evan Cullen said “the position articulated by Myles Worth (regarding the proposed IAG takeover of Aer Lingus) on the radio and in an e-mail to you were the personal views of Myles Worth not the CRC position”.

“For the avoidance of doubt Myles Worth had no mandate to represent the position he did in the radio interview of Sunday afternoon and in his recent e-mail to you.”

Siptu divisional organiser Owen Reidy said unions would need guarantees on employment, confirmation that there were no plans to outsource jobs and agreement on how IAG would interact with unions.

The CRC is scheduled to meet the airline’s Mr Kavanagh, this week after Aer Lingus reports full year results for 2014.

IAG, which owns British Airways and Iberia, has also asked to meet Ictu as part of its round of meetings on the bid and it is understood that such a meeting is likely to take place.

Aer Lingus’s board recommended the bid last month, subject to the Irish State selling its 25 per cent stake, but political and trade union opposition has been significant.

Senior Government Ministers said they are not yet convinced about the merits of selling; a Government-appointed group is preparing a report on its options. The Irish Times understands that Minister for Transport Paschal Donohue is due to bring an update on the issue to cabinet on Tuesday, but the Government is some way off making a decision.Resistance is especially strong among members of the Labour Party ahead of tough elections next year.

Former Labour party leader Mr Rabbitte, however, told RTÉ that he would be concerned for the airline’s future if it did not accept the offer from IAG.

He said the choice facing the owners of Aer Lingus is between “taking its chances as a small, independent airline in a world of consolidation, or taking up Mr Walsh’s offer to grow it, develop Dublin as a transatlantic hub, and grow traffic”.

He denied that the potential political fallout for both Government parties of a failed bid was a consideration, and insisted any decision would be taken in the “national interest”. – (Additional reporting: Reuters)