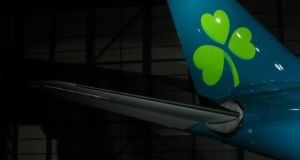 Aer Lingus has been given approval to join the transatlantic joint venture operated by its parent, IAG, and American Airlines in a move that could result in a number of benefits including lower fares to and from North America.

Approval comes nearly a year after the Irish-founded carrier formally applied to the US department of transportation to join the Oneworld revenue-sharing venture, which its members claim will generate up to $96 million (€79 million) in annual consumer benefits.

The department of transportation said that with the addition of Aer Lingus, the carriers are expected to expand capacity on some existing routes while introducing services on several new ones, allowing more options for travel to and from the Republic and the rest of Europe.

A motion filed by the joint venture to the department last year indicated a number of potential benefits that would occur with the addition of Aer Lingus. These included lower fares and more connectivity options for travellers due to increased codesharing. Under codeshare arrangements, two or more airlines agree to market a particular flight as part of their own schedule.

The carriers also said the expanded joint venture would result in 72 new unique codeshare destinations for Aer Lingus in North America and 12 for American Airlines beyond Dublin.

The airlines also said the move would unlock new routes for Aer Lingus in North America and could stimulate demand for up to 16,800 extra passengers a year and lead to lower fares.

Approval comes as the airline’s new UK subsidiary recently applied to the US transportation department for a foreign carrier’s permit allowing it to fly there from Britain.

Documents show Aer Lingus (UK) Ltd intends flying from Manchester to Boston, New York and Orlando, Florida, using four Airbus jets, two of which are normally based in the Republic.

Regulators in the UK launched an investigation into the Oneworld joint venture late in 2018 over competition concerns on a number of routes. However, earlier in September, the Competition and Markets Authority decided to allow it to continue operate for another three years before reassessing its future.

The joint venture, which was initially agreed between American Airlines, British Airways and Iberia, commenced in July 2010 as a transatlantic revenue-pooling agreement aimed at strengthening the carriers’ Oneworld Alliance, of which Aer Lingus was previously a member.