AA confirms it is in talks to sell Irish business

Irish executives expected to get stake under takeover; Carlyle Cardinal is the expected buyer 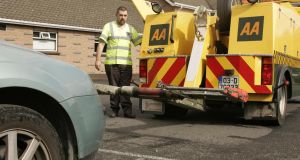 Roadside assistance and insurance provider AA plc confirmed on Tuesday that it is in talks to sell its Irish business.

In a statement released Tuesday morning, the AA said it has noted the recent press speculation regarding the potential disposal of its Irish business, and it “confirms it is exploring options in regards to its Irish business and a further announcement will be made if and when appropriate”.

London-listed AA plc, which put the Irish business up for sale earlier this year, is in advanced talks to sell the unit to Carlyle Cardinal, according to sources, confirming a report in the Sunday Times over the weekend which put the purchase price at up to €160 million. A deal is expected to be announced within weeks, they said.

Top managers at AA Ireland are expected to be granted a stake in the AA to keep them on board under its proposed takeover by US-Irish private equity fund Carlyle Cardinal Ireland.

Operating profit AA Ireland, led by a former senior Bank of Ireland executive Brendan Nevin, posted £13 million (€16.8 million) of operating profit in the year to the end of January on revenue of £38 million.

While reported revenues fell by £1 million during the year as a result of adverse foreign exchange movements, underlying revenue rose 8 per cent on a constant currency basis, the group’s latest annual report said.

The Irish unit, which employs about 480 people, provides motor breakdown cover for over 300,000 customers and auto, home and travel insurance for more than 225,000.

Over the weekend, AA Ireland unveiled plans to enter the life insurance market with products underwritten by Aviva, which is already on its motor insurance panel.