Major tourism development will seek to employ up to 1,000 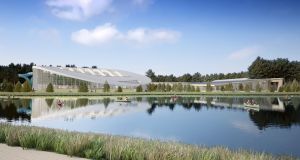 Planning permission was granted subject to 22 conditions, including a clause that Center Parcs will have to provide almost €1 million (€951,420) to Longford County Council as a contribution to the upgrading of public infrastructure in the area of the development.

The move follows an original planning proposal which was submitted to the council in October of last year.

The Center Parcs holiday village will be the biggest private tourism development in the State. It is due to be completed by 2019.

The development will create approximately 750 jobs during the construction phase. When operational, it will seek to employ up to 1,000 people in permanent jobs, with the majority of employees likely to live locally. It will have capacity for up to 2,500 guests.

It is to include 470 lodges and 30 apartments, indoor and outdoor activities, a spa, restaurants, cafés, shops and the Subtropical Swimming Paradise feature.

Center Parcs estimates that, when operational, the new holiday village will add approximately €32 million to Irish gross domestic product (GDP) per annum, and €1 billion over the next 20 years.

Almost 80 submissions - most of which were strongly in favour of the development - were sent in in relation to the plans for Longford Forest, as it will become known.

Some objected on the basis of loss of an amenity, while others objected due to the volume of traffic the facility is likely to generate when fully opened.

Potential objectors have four weeks to object to Longford County Council’s planning permission if it is to be considered by An Bord Pleanála.

Center Parcs will have to provide a water filter to prevent pollution in local rivers.

The company will also have to provide a biodiversity action plan for the new forest trees it will have to plant, along with an archaeological plan.

There will also be noise-abatement measures to be implemented for local housing.

He added: “We would like to thank Longford County Council for having the confidence in our proposal to grant planning permission.

“Engagement and dialogue with the local community in Ballymahon and the wider Longford area has been an important part of our approach, and will continue during the next steps of the planning process.

“The positive outcome recognises the transformative impact Center Parcs Longford Forest will have on the midlands region in terms of jobs, tourism and wider economic benefits.”

In September, the UK leisure giant revealed artist’s impressions of what its proposed adventure village is to look like.

Ireland’s first Center Parcs resort will be very similar to the company’s five existing adventure villages in England, with a central area of shops and restaurants around a swimming pool, although the Longford development will also have treehouses.