The Money Game: help is at hand for start-ups 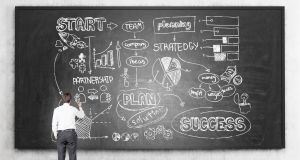 Money, money, money. One thing that will constantly niggle, drive and worry anyone who is starting a business is money. For start-up businesses it can be the most stressful part in getting the idea and the company off the ground, and why most fail. But where can start-ups get funding or try to get help for their idea?

The funding journey begins with a clear idea of exactly what you are doing, says Donnchadh Cullinan, manager of growth and capital banking relations at Enterprise Ireland.

“We keep telling our companies you need to figure out what your company looks like, then try and fund that appropriately. Very often everyone just gets obsessed with this whole concept – ‘Oh, you have to raise VC (venture capital) or you have to raise equity’ – and no you don’t actually. You have to fund your business appropriately to whatever the ambition of that business is. The reality is, the minute you go and fund your business with money that’s not yours, you begin to have other people on board having a say in what you do.”

Cullinan says there are a few places to approach first. “From the State support, your local enterprise office (LEO) is probably your first port of call. They will take companies at the very, very early stages and recognise that if they have no business idea they will help them craft one, [and] they will help them understand how to turn that business idea into a strategy. The strategy will dictate a funding requirement.

“Also, the business innovation centres (Bic) help people form those plans and inform those funding requirements. And once you understand the funding requirements you can go to any number of places to get the money. But there’s no point in going until you have the basics understood of what you are going to spend it on.”

Your strategy doesn’t need to be a mammoth document, and Cullinan says the most important thing is to keep it simple. “Someone used to say in here [Enterprise Ireland] – ‘All you need to know is what am I making? Who am I selling it to and how much am I going to make in selling it?’ And they are the only three things you need to distil it down to and that can be your strategy. The LEOs and the Bics help you ask these questions.”

The good news is there are lots of options for support and funding for your start-up. There are government initiatives like the Sure scheme, there are accelerator programmes, venture capitalists, angel investors and mentoring support from universities.

“Most SMEs start off by using their savings and scrabbling from friends and relatives.” says Eilis Quinlan, who owns Quinlan Accountants and is on the national council of the Irish Small and Medium Enterprises Association.

“What it comes down to is doing your business plan and costing things properly, because underfunding will kill you. But also overfunding if used stupidly will kill you because the temptation is to go out and get vans and brand them and get extra staff that you don’t necessarily need and then the money is gone. A rule of thumb is that it will always take twice the period to get off the ground that you think it will and you’ve got to fund that,” says Quinlan.

She adds that there are a lot of free resources to explore in terms of advice to begin with . “Really you’ve got to be very, very thrifty to begin with and there’s plenty of free information, and sit on Google and do plenty of research. Talk to people, go networking, try and talk to entrepreneurs who are maybe one stage further than you and keep asking everybody you know what pitfalls they hit. And then you’ve got to be tough and make decisions whether to listen or not, because you’re going to get an awful lot of bad advice as well, [with] people meaning well.”

You can set up a business as a sole trader, as a partnership or as a limited company. Quinlan advises people to start small initially as a sole trader before leaping into a limited company. “There’s a lot of information on revenue.ie. If you are starting off you don’t have to go the corporate route. Keep it simple until you need to, certainly for tax purposes. Start off small, keep control of it, and when it starts growing and you want the limited liability but you also want the tax incentives of being a company, you can always move the business into a company at that stage,” says Quinlan.

Keeping control is vital when it comes to your business in the early days, although the temptation and need for cash flow can often be a massive pressure. “Imagine if you were a company that got to a €1 million turnover and you’d given 90 per cent of your equity away to get to that million turnover versus a company that got to a €1 million turnover having given away 10 per cent of the equity. The guy in the second case has 90 per cent of the equity left. They can then slice and dice that much better than the other guy and they have infinitely more strategic options ahead of them,” says Cullinan.

John and Marianne Shine launched Shine’s Albacore tuna, which is a wild Irish premium tuna preserved in glass jars and tins, last year. Based in Killybegs, the couple have been passionate about fish for years, both being involved in the fishing sector for about 25 years and running their own businesses. They saw that tonnes of the delicious, premium Irish Albacore tuna were being exported instead of staying in Ireland, and when their eldest daughter Ciara graduated from her degree in business and marketing, she encouraged them and they decided to take the leap.

They received support from their local Donegal LEO, then Leitrim LEO and took part in the Bord Bia and SuperValu Food Academy. “I’d recommend any start-up to go to their local enterprise office, especially in Donegal. I honestly couldn’t think of a better way of doing it than we did. I just don’t know how people get start-up funding when you are only trying to sell a dream.”

Shines are now stocked in 300 shops around the country and are due to launch new products to their range and Shine says, “I have no regrets.”

While the struggle to get your business off the ground might mean months and years of hard graft and beans on toast, if it pays off it’s worth it, says Quinlan. “Don’t underfinance and don’t over-finance, but don’t be put off: if you think you have a good idea go for it.”

If you're interested in bringing your start-up further, the AIB Start-Up Academy is now open for applications. Visit aibstartupacademy.com for more