The Mill putting Drogheda on map as centre for innovation

Just two years after its launch, the enterprise hub is expanding to meet demand The Mill Enterprise Centre: within a few months of opening, it was home to 15 companies in sectors from gaming and social media to financial services and engineering and was rapidly running out of space. 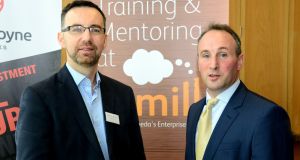 The Mill’s chairman Graham O’Rourke with Breanndán Casey, business development manager. The Mill offers a variety of supports for start-ups including mentoring, a female entrepreneurship programme and training on a broad range of topics.

In May 2014 the doors opened at The Mill, Drogheda’s purpose-built enterprise centre on the Newtown Link Road. What makes it somewhat different to other hubs is that The Mill is actively courting both foreign direct investment start-ups and local entrepreneurs.

The new centre has also struck a chord with Drogheda’s business community. Local companies believed so strongly in the concept that they contributed €250,000 towards the development of the €1 million facility.

Within a few months of opening, The Mill was home to 15 companies in sectors from gaming and social media to financial services and engineering and was rapidly running out of space. This accelerated the development of phase two and by the end of September the hub will double in size.

The Mill is a not-for-profit enterprise and depends on rental income as well as running training courses and other events to make ends meet. Having more space to rent is key to its long-term sustainability.

The idea for The Mill was first mooted almost a decade ago by members of the Drogheda Chamber of Commerce who felt the area needed a hub where start-ups could access a full suite of support services. The recession stopped the project in its tracks, but those leading the charge didn’t give up.

“Drogheda is a major town with a large skilled and experienced workforce, yet there was a gap when it came to having somewhere that people with new business ideas could be together,” says The Mill’s chairman, Graham O’Rourke, an entrepreneur in his own right and founder of Aphix Software.

“The interest from local business, big and small, was immediate and some of the original funders have come back a second time. We have had the backing of seven large companies such as CRH, State Street Bank, Coca-Cola and Flogas and 16 SMEs also stepped up to the plate.

“Their commitment has helped give The Mill its strong entrepreneurial ethos, as has the fact that our board is made up largely of entrepreneurs whose focus is on getting things done, not tying people up with red tape.

“We were very fortunate that the land for the centre was donated by Louth County Council and Louth LEO, Drogheda Port and Enterprise Ireland also supported the development.”

Breanndán Casey is business development manager at The Mill. He says the aim is to be as flexible as possible while embedding an entrepreneurial culture in the local business ecosystem.

“We offer office space, training, mentoring, whatever a business needs to grow and move on from here. There are a lot of companies around with maybe four or five employees. We’d like to see them grow to 10-30 employees and become clients of Enterprise Ireland. We are also keen to promote Drogheda and the M1 payments corridor as the EU gateway for payment firms.

“One of the features of the new space is an open-plan area where people with very raw ideas can sit side by side and benefit from each other’s experience,” Casey adds. “We also run brown bag events where our “millers” as we call them, get together for lunch and network.”

The Mill’s promoters are very keen to put Drogheda on the map as a centre for innovation. However being so close to Dublin has made this more difficult to achieve. “There’s a natural tendency to gravitate towards the capital and we want to change that mindset,” says O’Rourke. “We want locals to stay local with their ideas and to realise that whatever they can get in Dublin in terms of support they can get here.”

The Mill has been home to two foreign direct investment companies so far, electronics company Amphenol and online payments company YapStone which has its European headquarters in Drogheda.

YapStone moved into The Mill in 2012 with a handful of staff. Its workforce now stands at just under 70 people and will rise to 80 by the end of the year. It has since moved to the M1 Business Park in Drogheda.

YapStone’s vice president for international operations Peter Rowan says being able to test the waters for talent while renting space at The Mill was central to his company’s decision to commit to Drogheda.

“We were initially in Dublin but as Drogheda and Dublin are about equidistant from Dublin Airport and rental costs were a lot more acceptable in Drogheda we decided to move,” he says.

“We were told that Drogheda offered a good talent pool and that proved correct. In particular we need a multilingual workforce and were able to get it. By the time we left The Mill we were operating in seven languages. The Mill was a turn-key solution. We just had to add our own technology. This allowed us to grow quickly and led to YapStone making a significant investment in the region.”

The Mill offers a variety of supports for start-ups including mentoring, a female entrepreneurship programme delivered by the DCU Ryan Academy and training on a broad range of topics from writing business plans to creating digital strategies.

Pat Byrne, founder of training company DCM Learning, was the centre’s first “miller”. He started up on his own in late 2013 and his business now employs six people full-time and has a panel of 20 independent specialist trainers delivering courses in areas such as project management and business analysis. DCM recently moved out of The Mill to new premises in Drogheda town.

“It’s nerve-wracking starting a business and it was very useful to be with likeminded people,” Byrne says.

“The Mill provided us with the small affordable space we needed at the time and a great deal of sound business advice. In fact Sean MacEntee, an experienced businessman who was our mentor at The Mill, has since become our company chairman.”