The entrepreneur who wants to build communities

Sean Coughlan’s socially-focused career continues with a move to the helm of boards.ie 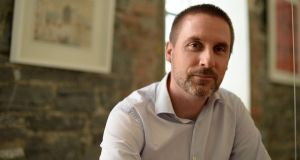 Sean Coughlan: ‘There are conversations happening on boards.ie which are very relevant to what’s going on in Ireland’. Photograph: Dara Mac Dónaill/The Irish Times

This is a career to watch. In 2000, as part of researching a book I was writing, I interviewed Sean Coughlan as he was getting ready to leave Baltimore Technologies, at the time red hot and very profitable, to take the Higher Diploma in order to become a teacher. With a degree in theoretical physics, he was clear-sighted about how the cars in the Baltimore Technologies car park were often the only clue as to who had just sold shares in the company.

He was a hiker. He was fashionable in an alternative way. He was one of those men who always looked neat and tidy.

We meet again in a nicely restored warehouse, at a huge conference table fashioned from the wing of an aeroplane. This is the office of Declan Ryan, one of the inheritors of the Ryanair fortune, who funds Social Entrepreneurs Ireland. Coughlan, its chief executive, carefully explains that this is the reason Social Entrepreneurs, an organisation that funds and mentors people with ideas for social change, is housed in such fashionable luxury.

Coughlan is off on his holidays next week. He’ll be going hiking in the Dolomites with his wife and two daughters, as usual. He used to carry his younger daughter, Thea, up mountains on his back. At that time, he says, she would loudly declare that hiking was stupid. But now Thea and her sister, Ana, insist on going to the Dolomites, with six other adults and seven other children, every year.

When Coughlan comes back from the hike he will return to the offices of Social Entrepreneurs, of which he is co-founder, for a few days, in order to tidy things up. The organisation is a not-for-profit body that the more old-fashioned among us might call a charity. Then he’ll leave to take up his new job as head of boards.ie; a business, although perhaps a business in sheep’s clothing.

Boards.ie is a community based discussion website which has been in existence since the late 1990s – an eternity in terms of the internet. In fact it was started for and by a group of people who played the computer game Quake.

At one point, remembers boards.ie’s community manager, Dav Waldron, who was involved in the early days with founder Tom Murphy: “There were only two women on the site and thousands of men.”

Boards.ie maintains some features of its amateur history. For one thing it looks clunky; its layout is old-fashioned. Its slogan is the folksy “Now Ye’re Talkin’ ”.

For another, the site is managed by moderators – that is, the people who supervise the conversations – who are all volunteers.

“You do it for the passion about your topic, and the social aspect,” says Trevor Prendergast, a volunteer administrator on the website who lives and works in Bahrain.

The moderators will be meeting later this month in Dublin for what are known as “boardsbeers”. This happens a lot across the topics discussed on boards.ie, which include cycling, food, very localised discussions on what’s going on in a specific area, cars, parenting . . . “People’s passions,” as Trevor says.

Now Coughlan is talking about boards.ie in terms of untapped potential, just like any other enthusiastic executive. He was recruited by the current owners of boards.ie, Distilled Media, who also own property website daft.ie, news resource thejournal.ie, and a whole lot else besides.

“Forums were very popular early on [in internet history],” says Coughlan. “There’s a perception that they’ve been superseded. The reality is very different. The way I think of boards.ie, it’s a platform, a place to go . . . and a great community. A huge amount of people, 70,000, are daily active users. Boards.ie is a way of following topics you are interested in.”

Boards.ie is also quite hard to find your way around; something that Coughlan acknowledges and wants to improve. At the moment boards is free to use and makes its money through advertising and “Talk To” forums, where companies like Bank of Ireland and UPC, to give just two examples, set-up their own forums and get customer feedback on their companies and services.

For the ordinary user, Coughlan says, “I want to find ways to increase ease of access. And then there are conversations happening on boards.ie which are very relevant to what’s going on in Ireland . . . There is the potential to shape those conversations and inform people about them.”

Whether that sharing of information would happen on commercial basis or just by what he calls “putting it out there”, he doesn’t say.

But he’s very clear that he’s moving back into what he calls the “for-profit” sector, after a decade working for the organisation he founded, Social Entrpreneurs. “There should be much more porousness between the two,” he says. “My only motivation for leaving Social Entrepreneurs is that it should be run by only one person. It needs fresh energy. And, equally, it’s good for me.”

Coughlan seems to have a mystical attachment to the word entrepreneur. For some in Ireland it’s a buzz word from the days of our delusion. For him, being an entrepreneur is about “New ideas, being ambitious, thinking big and doing it.”

The end point for the social entrepreneur, he says, is [social] change. Asked for the most successful projects started by social entrepreneurs on his watch he cites Camara, which was started by Cormac Lynch “he came from the business world”. It provides recycled computers to schools in Africa. He also points to Women for Election, which his organisation funded.

“Fifty per cent of the successful female candidates in the recent local elections went to Women for Election [training],” he says. He ascribes the increase in women candidates and women successfully elected to this. Although he does not demur at the suggestion that Sinn Féin’s Mary Lou McDonald could have had something to do with it.