Xbox One X: Microsoft’s latest weapon in the console wars

It’s designed to do battle with Sony’s Playstation, but it comes with a hefty price tag 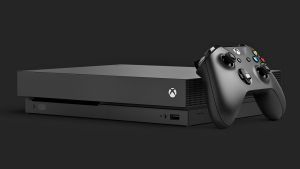 The One X is the Xbox for 4K fans, and those who want to get the best of the platform in the coming years

Where to buy: online or instore

The console wars are revving up again, with Microsoft releasing yet another version of its Xbox One to do battle against Sony’s Playstation. This time, it’s the Xbox One X, still part of the Xbox One family but with a bit of extra oomph. It enters the fray a little while after the PS4 Pro, and over a year after the Xbox One S hit the market.

If you were expecting something drastic from the Xbox One X, you might be slightly disappointed that Microsoft has kept it aesthetically similar to last year’s Xbox One S, the upgrade that slimmed down the machine and added some extras such as High Dynamic Range support. It’s roughly the same size and weight, with the same ports on the rear – the only real difference being colour. The Xbox One X standard edition is black; the S was white.

When you start it up, the user interface is the same, and they play the same games, use the same peripherals, etc. So far, not much to tell them apart but, as you’d expect, the real differences lie under the hood.

So what exactly is new about the One X? It comes with a 2.3GHz 8-core AMD Jaguar processor, a six-teraflop AMD Radeon GPU and 12GB of RAM. If your eyes glazed over reading that list and you’re desperately trying to figure out what teraflop is, let’s cut to the chase: it’s faster and more powerful than the previous Xbox One versions and, on paper, more powerful than the PS4 Pro. (A teraflop, by the way, measures graphics power and is a trillion floating point operations per second.)

To put it simply, the One X is the Xbox for 4K fans, and those who want to get the best of the platform in the coming years.

Where you’ll really see the difference between Xbox iterations is with the “enhanced for Xbox One X” label that some games will carry. That means visually better-quality content that can only be accessed on the Xbox One X. Exactly what that means, though, varies from game to game. For some, it’s the full shebang: 4K gaming and HDR graphics, such as Fifa 18, Forza Motorsport 7 and Gears of War 4, as well as higher frame rates. Others go for 4K and Ultra HD graphics without the HDR support, such as Dishonored 2. It goes without saying that to really see the full benefit of the One X’s improved graphics, you’ll need a compatible ultra-high-definition TV or one that has HDR support.

There’s another category of games, though, which are tagged as enhanced for Xbox One X without 4K Ultra HD support or HDR. In this case, it means the developer has gone for higher or steadier frame rates or improved textures. So there’s a spectrum of enhancements there, and not all mean 4K.

However, the Xbox One X also stumbles a little on the games it offers. With a price tag like that, many players will need a compelling reason to dig deep. Microsoft’s previous games arsenal – Halo, Gears of War – may have tipped the scales in its favour, but the truth is there is no real standout game that’s exclusive to the One X at launch. There is a list of games that are in development to take advantage of the extra power behind the console, but titles such as Forza Motorsport 7 launched prior to the console, and third-party titles such as Assassin’s Creed: Origins are also available on the PS4 Pro.

If you have a 4K TV, or one that supports HDR, you’ll see most benefit from upgrading to the One X. If you don’t, well, maybe in the future you might. Games look better in 4K and HDR, but the enhanced frame rate and textures also make a difference.

That extra power comes with a cost. It’s €500 for the new X, compared with €280 for the 500GB One S console. There’s also a limited number of games that come enhanced for the new platform right now. There are plenty in development or coming soon, though, so that will be rectified. To get the top experience, you’ll need a 4K TV with HDR support.

Enhanced games vary, from better frame rates right up to 4K and HDR. The console can also be used as a 4K BluRay player. Like the One S, the Kinect is an add-on here rather than an integral part of the system. You’ll need an adapter to use your Kinect with the One X.

If you want the best of what Microsoft can offer, the Xbox One X is the console to buy, but the price tag might be off-putting.