Will L’Oréal find that wearables are worth it?

My UV Patch is an electronic monitor which measures sun exposure 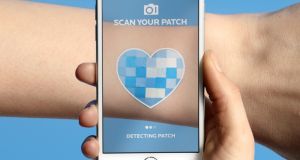 The wearable monitor has a printed grid of UV-sensitive dyes that change colour depending on how much sun exposure they receive.

Lipstick. Nail polish. Shampoo. These are not exactly high tech but they are the kind of beauty staples that come to mind when you think of global beauty brand L’Oréal, which is why people were surprised when the company surfaced at the Consumer Electronics Show earlier this year.

Global vice-president of L’Oréal’s technology incubator, Guive Balooch, and his team were there to demonstrate their latest development: a stretchable, wearable electronic UV monitor – developed in collaboration with La Roche Posay – known as My UV Patch.

What at first glance looks like an ordinary sticker with an image of a blue heart is in fact a printed grid of UV-sensitive dyes that change colour depending on how much sun exposure they receive. This is coupled with an NFC (near field communication)-enabled coil that can communicate with your smartphone.

The idea behind the patch is that it measures UV exposure, which causes sun damage and ageing of the skin and can, in some cases, lead to skin cancer.

And it feels so light it’s like wearing a child’s transfer tattoo that comes with bubblegum.

With a launch date of June for this second skin electronic wearable, I meet Balooch to find out more.

As we shake hands I notice that he is wearing two patches – one on each hand. He points out that they haven’t changed colour much because he’s been stuck inside, working.

Balooch and his team have been busy for the past 3½ years, notching up several beauty tech products and collaborating with both small tech start-ups such as the Manchester-based Image Metrics (who worked on the reverse ageing effects in The Curious Case of Benjamin Button) and heavy hitters such as the Irish custom design manufacturing company PCH International.

“My UV Patch is the result of a collaboration with PCH and Boston tech start-up MC10, a company working on the future of wearables. They take electronics and materials and make them so thin that they become like a second skin, like what I’m wearing right now.”

The future of wearables, says Balooch, doesn’t have to peak with the smart watch and similar devices. It can be wearable – and disposable – patches that integrate with the body rather than something you have to remember to charge and put on every day.

An interesting development with PCH is the fact that the strip is NFC-enabled. Although this means that at present the patch triggers the camera in your smartphone when the My UV Patch app is open, Balooch hints at future applications: “Today, what it’s doing is automatically taking a picture.”

“Liam Casey [of PCH] is working on this tech through us; he’s looking at different areas around payment so there’s a lot of potential around being able to put wearables somewhere on your body. There are technological advancements that can be applied outside of the [beauty] industry.”

If this sounds like the strategic thinking of a tech start-up rather than a global beauty brand, this is because the tech incubator was designed this way: “L’Oreal came to me internally and said that there was an interest to figure out what technology will mean for the beauty industry for the next five to 10 years.

“They wanted us to work on some select projects around tech that could link to the beauty industry. And I think it was a very smart move because when you look at the health or fitness industry you can see how much technology has enhanced the consumer experience.”

The first project to emerge was a virtual cosmetics app called Makeup Genius. This was developed with Image Metrics using complicated imaging technology to give the makeup a photorealistic appearance while staying on your face as you moved about in front of a smartphone camera.

Anyone who has seen recent episodes of TV comedy Silicon Valley will know what I’m talking about. The makeup moves with your face and can be viewed from all angles, much like the virtual moustache that main character Richard tries on while visiting tech start-up Flutterbeam.

Shortly afterwards, the incubator made the move from software to hardware, culminating in a device called Le Teint Particulier that assesses skin tone and, based upon this, mixes personalised custom foundation.

This is currently only available at the Lancome counter in some US department stores but Balooch says there are plans to expand over the next two years.

“I started thinking about what wearables and personalisation and new supply chain innovations will mean for our consumers in the future. So we did some work around personalisation first: we created this little device that takes a measurement of your skin tone and makes a foundation, right there, on the spot.”

While these innovations have a specific target market, ie women interested in cosmetics, My UV Patch is the first one to appeal to all consumers across the spectrum. Partnering with La Roche Posay, the idea is to educate as many people as possible about the dangers of UV exposure.

Many people think of sunscreen products as something you wear to the beach or by the pool on holiday, when in fact UV rays are hitting our skin every day, rain or shine.

In fact, cloud cover can lead to UV exposure that is just as high as on a bright, sunny day.

We in Ireland are not the best at applying sunscreen. In fact, Ireland has the highest reported incidence rate of non-melanoma, the most common type of skin cancer (NMSC) in Europe.

By 2040 it is estimated that there will be 13,000 females and more than 20,000 males diagnosed with NMSC, which is the greatest projected increase of any cancer in Ireland.

“Educating people on how and when to protect themselves from the sun and harmful UV rays is one of the first preventative measures we can take to tackle skin cancer,” says Kevin O’Hagan, cancer prevention manager with the Irish Cancer Society. O’Hagan says that the My UV Patch wearable “could deliver a step change in people’s awareness of UV exposure and sun protection” adding that it is “fantastic to see smart technology being used in this way to help with such an important public health issue”.

The My UV Patch tells you what level of UV protection you should be wearing based on the UV index for your location, your “skin profile” and the monitoring of the photosensitive dyes on the patch.

It can be worn for three to five days and survives showering and washing of hands. The app chimes regularly on your smartphone reminding you to check in.

“You apply the patch, take a picture from inside the app and it immediately calculates your level of risk. The coloured squares on the patch are changing at different rates: if I’m outside for an hour with a strong level of sun exposure and no sunscreen on it will turn from blue to white,” explains Balooch.

“The entire point behind My UV Patch and the partnership with La Roche Posay is to educate people,” he says. With this in mind, the success of this new wearable may be down to how easy it is to use.

Having tested it for several days, I can attest to its ease of use.

It is so thin and flexible that you forget it’s there (until a friend or colleague asks why you have a blue sticker on the back of your hand).

And of course you tell them it’s because you’re excited about a wearable UV monitor that helps you to protect your skin. And, because you’re worth it.