Web Summit: Investors line up to get on board private jet hire company 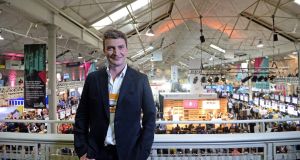 While many a start-up entrepreneur is dreaming of deals at the Web Summit, one has venture capitalists knocking on his door.

The founder of Stratajet, Jonathan Nicol, touched down in Dublin on a private jet yesterday, and sitting beside him was an investor. “It was cool, as top venture capitalists asked could they fly with me. I had Fred Destin of Accel sitting in the co-pilot’s seat.”

But how does a start-up, which just launched last month, afford a private jet?

“We raised $5 million in our seed round, and used some of it to buy a 10-seater private jet,” Nicol says. “The investors thought I was joking when I said I was going to buy a plane with some of the seed funding. I wasn’t.”

However, considering Stratajet is a personal search engine for private jet bookings, it is appropriate that the company has its own plane.

Stratajet has developed a real-time platform which offers a simple way for the public to book a private jet. Prices are fully generated by computers rather than people, leading to an instantaneous booking process.

“Most people believe you can turn around to people with private jets and ask how much it will cost to be a passenger. But it’s not that simple. For example, landing fees change at different times of the day.”

Nicol says he came up with the idea while working as a pilot on private jets.

“I sold my last company to Hewlett Packard. I had a one year work-out clause in my last company, but I didn’t actually have to work. I became a pilot on a private jet to pass the time, and I discovered 40 per cent of all private jet flights have absolutely nobody bar the pilots on board.”

Already the platform has generated 98,000 quotes. Nicol says approximately one booking comes through the platform each day at present, for the 1,700 private jets in Europe, including 50 in Dublin.

He says the beauty of the platform is that private jet owners wanted to use it, even without getting any bookings.

“Private jet owners use our software to see how much landing fees are, the cost of the fuel burn, etc. This breaks the demand and supply problem, as we already had lots of plane owners using our platform anyway.”

He says Stratajet is modernising the private aviation industry, making it more accessible and affordable to a wider audience than ever before.