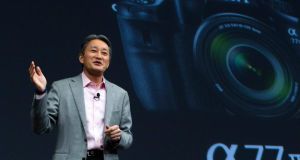 With Samsung and LG doing battle over ultra high definition, Sony was also squaring up for a fight in the TV market.

Android TVs, 4K action cameras and a new look for its wearables were all announced at the company’s at its press conference ahead of the opening of the International CES in Las Vegas.

The company showed off its thinnest TV yet, as part of a line up of 12 new 4K sets that it hopes will tempt TV buyers to invest in 2015. The new TVs will be powered by its 4K processor X1, which improves colour, contrast and clarity of images.

The X9000C series is 4.9mm at its thinnest point, which makes it slimmer in parts than Sony’s own Xperia smartphones. Also on offer is the X9300C series, which are the first TVs to support high-res audio and come equipped with speakers compatible with the new sound technology.

More significantly, Sony announced it would be using Android TV on its new Bravia smart TVs, opening up the range to new content and connectivity across the company’s line of Android powered phones and tablets. The TVs will also be compatible with Google’s Cast streaming technology, and a

The obligatory celebrity appearance was provided by Tony Hawk, who was on hand to help Sony push its 4K Action Cam. The new device is Sony’s direct challenge to the GoPro in the action photography arena, offering improved image stabilisation for full HD shooting over previous models.

The Android Wear-based SmartWatch 3, which is already on sale, got a more sophisticated look, with a stainless steel edition of the watch. The new version will go on sale next month, and Sony has been working with developers to create new ways of using the watch. As part of this, the company will ship its SmartWatch 3 with access to two premium apps - Golfshot and iFit.

Sony is also showing off a number of wearable prototypes, including the Smart B-Trainer, which is aimed at runners. The all-in-one headset device combines sensors and music playback to encourage the establishment of a running routine; it matches a runner’s heart rate to songs, automatically selecting the tracks that have a tempo that matches.

Sony chief executive Kaz Hirai had earlier criticised the “vicious” attack that saw the Sony Pictures’ computer system hacked late last year and thousands of documents and emails released, causing embarrassment for the company. The attack came ahead of the planned launch of The Interview, a film that was based on a fictional plot to assassinate North Korea leader Kim Jong Un. The film was initially pulled from cinema release, but Sony made the decision to release the film online.

Mr Hirai thanked those who has seen the film, saying freedom of speech and expression are “lifelines of Sony and our entertainment business”.