Links between BT and Deutsche Telekom will grow in importance over time, says chief 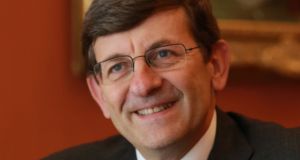 Vodafone Group chief executive Vittorio Colao sees three or four pan-European telecoms giants emerging in the coming years as companies continue to engage in deals amid a growing need for investment in networks.

“There’s a bit of consolidation that needs to take place [in individual markets] – having stronger, bigger operators that can invest would be in the interests of everybody,” Mr Colao said in an interview with The Irish Times.

“And then there will probably be some tension to aggregate cross-country. So I can see the emergence of probably three, maybe four, very large pan-European players. And then every market having the choice between three alternatives, which is a set-up that isn’t wrong.”

Europe accounted for two-thirds of Vodafone’s £37 billion total service revenue in the 12 months to the end of March, following years of restructuring, including the $130 billion (€115 million) sale of its 45 per cent stake in Verizon, the US’s largest wireless operator, in 2014.

“The UK case was very difficult from the beginning,” said Mr Colao, as the merged company would have had network sharing agreements with Vodafone and BT’s mobile unit, EE. Hutchison is seeking approval from European competition authorities to merge its Italian unit with the local division of Dutch operator VimpelCom.

Mr Colao said French operator Orange “has a clear ambition to be multi-country”, while he suggests that links between BT and Deutsche Telekom “will grow in importance” over time.

Deutsche received a 12 per cent stake in BT this year after it elected to be paid partly in stock for a holding in EE.

1 House asking prices rebound but will likely fall again - MyHome
2 Plans for €2bn Dart expansion lure Bombardier to Dublin
3 TV guide: Pros and cons of broadcast television options
4 Ireland has among highest rates of home-working during Covid
5 Google tells workers to return to country where they are employed
Real news has value SUBSCRIBE