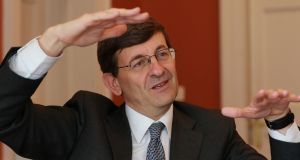 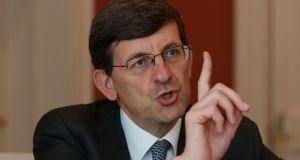 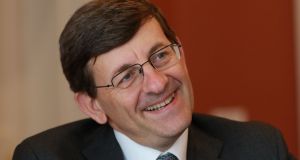 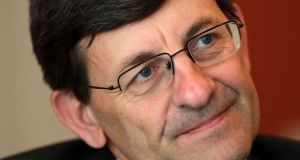 If you happen to work in one of Vodafone’s overseas offices, Vittorio Colao is not someone you want to bump into too often.

“When I don’t show up for a couple of years, it means that there is nothing to worry about,” Colao (54), chief executive of the Vodafone Group, says in an interview with The Irish Times.

The Italian was in Dublin last week to catch up on the phone giant’s Irish business. Ireland is home to 2.29 million mobile and fixed-line customers. Revenues grew for the first time since 2006 in the year to March, as mobile customers’ data usage soared 72 per cent amid an ongoing shift to fourth-generation (4G) devices. This compensated for a dip in mobile subscribers below two million for the first time in more than a decade.

The unit also began to offer ultra-fast internet access through a joint venture with ESB in December and, a month later, TV services.

“It’s almost a perfect country. We even have a female CEO,” he says, referring to Vodafone Ireland’s boss of three years, Anne O’Leary, who is sitting in on the interview to make sure Colao doesn’t fluff his local lines.

It’s a far cry from when the group took a £1 billion (€1.3 billion) goodwill impairment charge against its Irish assets in the 12 months to March 2011. This was around the time the State entered into an international bailout to shore up the banks and State’s faltering finances. Irish sales and profits were flagging as phone companies competed aggressively for business and consumers held back on spending.

At the time, Colao, group chief executive since 2008, had bigger issues on his mind.

Colao has spent the past six years reversing some of Vodafone’s expansionist past. Along the way, under pressure from shareholders to simplify the business, he has sold minority interests in Japanese mobile phone group Softbank, China Mobile, French phone business SFR and, in 2014, the $130 billion (€115 billion) disposal of Vodafone’s 45 per cent holding in Verizon Wireless, the largest US wireless carrier.

Vodafone, which now operates in 26 countries, including joint ventures and associates, returned to organic revenue and operating profit growth in its most recent year for the first time since 2008. A £19 billion investment programme, called Project Spring, focused on mobile and broadband networks is beginning to deliver returns.

Colao, the son of an Italian carabinieri officer and has been a reserve in the military police force himself, has been rewarded handsomely.

His remuneration almost doubled in the past year to £5.27 million (€6.8 million), though it is still a far cry from the double-digit figures he was commanding earlier in the decade.

Now he has his eyes on getting into all aspects of modern life in Europe, where Vodafone earns two-thirds of revenues.

“Long, long term, do I see a future where you will have a relationship with Vodafone and then you will try to get your broadband, your TV, your fixed, your iPads, wearable [technology] that will be connected, and potentially you will have your car [linked up]? I think that’s the logic.”

To get to there, he says, Europe needs to cast off the conventional copper cables laid down by former monopolists across the continent and grow a “digital spine”.

“In all these markets, we have one incumbent who tries to use old technologies – accelerated copper, we call it. What we talk about is fibre, real competition and a gigabit society.”

In Ireland, Vodafone’s old foe Eir, formerly Eircom, plans (with the blessing of the regulator, ComReg) to hike the price it charges operators, such as Vodafone, BT, Magnet and Sky, to rent space on its broadband network by 18 per cent from September, to €23 a month per user.

“In most of continental Europe, I am in the low teens and actually I complain because they don’t go down quickly enough.”

Colao lays much of the responsibility at the door of ComReg.

“If the regulator in this country does not have competition as a primary objective, then they will not get a lot of investment,” he says. “I think they should include a little bit more of these thoughts into their deliberation.”

The perennial debate over whether Eir’s wholesale arm, Open Eir, should be run as a separate business resurfaced this year. The regulator is carrying out a review of the former monopoly’s dominance of the market’s infrastructure.

In the UK, BT’s wholesale business is operated separately from its retail division, but the regulator there is seeking even greater separation – a structural split – to spur completion for consumers and businesses.

“If you look at the chart of who are the most expensive in Europe, first are the Swiss, then there’s Ireland and pretty close is the UK,” said Colao. “The point is, when you have a problem with pricing you should intervene. Whether you achieve that through regulation, through structural separation, through functional separation depends a lot on the country.”

Meanwhile, Vodafone is attempting to break Eir’s grip of the broadband market. Last year it began to roll out a fibre-to- the-home network with speeds of up to 1 gigabit per second with ESB. Siro, the €450 million joint venture, aims to reach up to 500,000 homes and businesses in small towns by 2019.

Colao reckons Vodafone’s push in this direction will help Eir give birth to its better self.

“If you look at Spain, where we compete with Telefónica, Telefónica has pushed into fibre more decisively,” he says. “They are bringing more advanced products. So, it will be better for [Eir] in the end.”

An altruist indeed, this holder of an MBA from Harvard and a former investment banker who started his career with Morgan Stanley.

Siro is vying with Eir and others for two Government-subsidised contracts, totalling €1.5 billion, to extend fibre broadband to 750,000 rural homes and businesses. Controversially, however, Eir plans to connect 300,000 of these homes on a commercial basis, potentially making the remaining spoils less attractive.

Across Europe, Vodafone, like all mobile phone companies, has been forced by Brussels to become more big-hearted as roaming charges across the 28-country bloc are abolished by June next year.

“It is a headwind,” he says, “but at the end of the day, it is in the range of a couple of hundred million [pounds to earnings (Ebitda)], which for a group like ours is manageable. He add that the company could see some “good surprises” as customers use mobiles more while travelling.

The towering Colao, born in the northern Italian city of Brescia at the foot of the Alps, near Lake Garda, says he never switches his own mobile off, except when he is cycling or windsurfing, “although I don’t windsurf much any more. But I’m very good at switching off mentally. So it takes me 25 seconds to move literally from having my mind on big issues to switching to silly family matters and so on.”

He is taken by something he once read: that the essential characteristic of the head of a large multicountry operation is not very bright, but is capable of switching off.

Last month Vodafone lost its No 2 executive and potential successor to Colao when his compatriot, Paolo Bertoluzzo, said he was quitting to take up a new role with an Italian financial and payment services company. Bertoluzzo, the group’s strategy and business development director, had been with the company since 1999.

Ask Colao on when he sees himself making way for someone else, and he clams up: “It’s a decision for the board, for the shareholders. I think I am closer to the end than to the beginning.”

Well, maybe, but Colao says he’s more engaged now in the business than when he took over, having simplified the group and returned more than £51 billion (€66.2 billion) to shareholders – of which there are more than 330,000 in Ireland – following the Verizon deal.

The stake sale, which will probably go down as Colao’s career-defining moment, was famously agreed with Verizon boss Lowell McAdam while the pair watched an ice hockey match in New York’s Madison Square Gardens.

His focus now, he says, is “very operational, very much thinking of the future of technology and less of the big corporate transaction type of thing.”

Still, he knows that Vodafone must play its part in Europe’s fast-consolidating telecoms industry.

Earlier this year, the group announced plans to set up a €3.5 billion joint venture with US billionaire John Malone’s Liberty Global in the Netherlands. It came after the two groups last year abandoned long-running talks that would have resulted in a swap pf various businesses. The complexity of such a deal was just too much.

Elsewhere in the industry, the EU moved last month to block Telefónica’s sale of O2 to Hutchison Whampoa’s Three brand in the UK. This came two years after it allowed a merger of the two companies’ Irish units to cut the number of mobile network operators in the market to three.

Hutchison and Dutch operator VimpelCom are now seeking to merge their Italian units and offering to sell some of their combined assets to get the deal past regulators. Denis O’Brien’s Digicel is reported to be among interested bidders, which would mark a departure from the company’s focus on emerging markets.

At the outset of the discussions, the head of Orange, Stéphane Richard, said that 20 years of regulation in Europe had left the continent’s carriers in a fragile state compared with international rivals, and that consolidation was necessary allow them to invest in infrastructure.

“There’s a bit of consolidation that needs to take place,” Colao says. “Having stronger, bigger operators that can invest would be in the interests of everybody.”

Colao also sees the relationship between Deutsche Telekom and BT “growing in importance” over time. The German operator received a 12 per cent stake in BT earlier this year after it elected to be paid partly in stock for a holding in EE, the British mobile company.

“I think Orange is another fully respectable company which has a clear ambition to be multicountry,” Colao says.

“So, I can see the emergence of probably three, maybe four, very large pan-European players. And then every market having the choice between three alternatives, which is a set-up that isn’t wrong.”

Something that might surprise: “The only way you can do this job...is to really be able to switch off. Nothing ever keeps me awake other than serious stuff with my family.”

Something that might surprise: “The only way you can do this job...is to really be able to switch off. Nothing ever keeps me awake other than serious stuff with my family.”